We walk by faith

September 10, 2016
It was almost exactly 15 years ago that a particular line of scripture came to my attention.

For we know that if the earthly tent we live in is destroyed, we have a building from God, a house not made with hands, eternal in the heavens.... For while we are still in this tent, we groan under our burden... So we are always confident; even though we know that while we are at home in the body we are away from the Lord — for we walk by faith, not by sight. 2 Corinthians 5:1-7 (abridged)

The morning began with an unusual noise of a low-flying jet overhead, as I tried for a little more sleep before getting out of bed. A short while later, a fellow student told me about a plane crash. I sat uncomfortably with others for 10 or 15 minutes until our 10:00 class on "Aggression" was canceled and it was announced that we would gather at noon chapel. Two things stand out at that service. John McGuckin standing to the side, in black cassock, with his prayerbook and rosary, softly and silently praying throughout the service. And several readings, including this one.

A short while later, unable to give blood at Columbia Presbyterian, I made my way downtown, the start of what would be a...difficult...nine month journey, of fear, of sorrow, and anger, and despair. Of reckless hope, into the experience of radical welcome, and knowing great blessings. 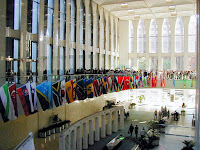 The World Trade Center was part of my extended neighborhood. For most of my time on Wall Street I commuted through it - except when the PATH was closed from the 1993 bombing. I bought the suits for my first Big City job at the Alexander's in the southeast corner of the WTC concourse. We had office Christmas parties there, and my favorite homeless ministry held fundraisers there. Our bank branch was there, and I am still sentimentally hanging on to the last bit of shampoo from the WTC mall.

It was commonplace to hear that "9/11 changed everything." Fifteen years later, not so much. It didn't change the desire for retribution. It didn't change the ability of this nation to create more just and sustainable geopolitical relationships. And it hasn't changed the fact that terror is a daily fact of life throughout the world: military and civilian casualties in Afghanistan, attacks in Mumbai and Paris, drones in Yemen, bombings in Iraq and Syria and Turkey, refugees on the high seas and internment camps, daily violence on American streets, and the daily toll of poverty and oligarchies.

We walk by faith, and not by sight.

You don't have to look for reasons to lose hope. They will always be close by.

But the reasons for hope are profound and prolific. Don't forget the glories of earth and sea and air. But pay more attention to the ways that care is woven into the fabric of the universe, and how kindness is the norm in human relationships. Do not doubt that we are building, too slowly, a more loving and peaceful world. Hitler's Reich is gone. Ghandi's cause is still growing.

And even if you can't see it, hope is not optional. Giving up is unacceptable, not because you'll go to hell, but because you'll stay there. And everyone absent from the struggle makes the path more difficult. Together, the hope becomes real. Keep the faith. 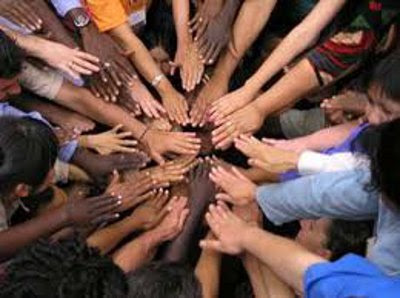 WTC 2 (South Tower) Lobby and mezzanine. Flags of the world represented the vision of international commerce and peace.

Image of hope: All hands in