Showing posts from November, 2008
Show all

November 27, 2008
Lord of heaven and Lord of earth, your heart is grieved at terror and violence. Watch over the city of Mumbai at this hour. Protect, we pray, those lives still at risk. We pray that captives be released, that those seeking to do further violence be restrained, and the lives even of the authors of violence be held safe from harm. Nurture and cherish those many lives affected by these attacks: especially those of the victims and those close to them, witnesses, and responders. And in a city with great wealth, let us remember the poor, that the shalom of the city which we seek be not simply the end of violence, but renewed health and hope for all who shelter there. In Jesus name, we pray for deliverance and for peace, trusting in thy great mercy. Amen. &nbsp
Post a Comment
Read more 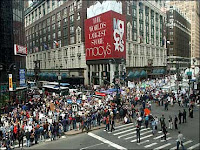 One of my peak spiritual experiences came when I volunteered with United for Peace and Justice to work at a big anti-war march. It was planned before the Iraq invasion but took place just after the armed conflict began. Through the random (or Spirit-led) workings of their fairly-anarchic organization, I got assigned to the security detail. About twenty people stationed on Broadway in the lower 20s with plastic tubs and sacks, and one guy with a bullhorn asking for donations to support the work and the next march. Surrounded by a great cloud of witnesses, there was little need for actual security to guard the money, what I mostly did was thanked people. "Thank you for coming out today!" "You folks are awesome!" shouted a few hundred times, to some subset of the 250,000+ people who filed by. I can scarcely tell you how good I felt doing that. At the closing of what is probably his earliest letter in the Bible, St. Paul urges his friends "Be joyful always; p
Post a Comment
Read more 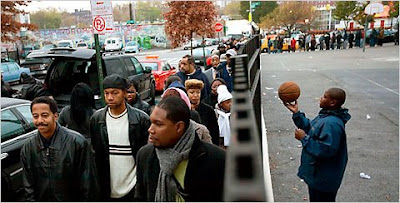 "In the unlikely story that is America, there has never been anything false about hope." -- Barack Obama, Nashua, New Hampshire, January 8, 2008 There are a great many things that can be said today, and people all over this nation and the world are saying them. IT'S BEAUTIFUL! There's a woman I know who has spent most of her life in Jersey City in Ward F - you know, the part of town that Martin Luther King Drive runs through. Janice has raised kids and grandkids, often without much to go on. She is ecstatic. She, like me, has had a crazy smile on her face all day! She told me how, last night she didn't want to leave the TV even to go to the bathroom, and when she finally ran out and came back, Obama had gone from 100-something to 200-something and she knew she was about to witness something big. She talked about the people crowded into Grant Park and Times Square, how they were black and white and every color. She stayed up until 3am, crying and laughing a
1 comment
Read more

It's always been about hope

I've spent the past few weekends in Pennsylvania, along with other volunteers from NJ (and elsewhere). It has been a heartening and moving experience. I've heard remarkable things. The woman in East Stroudsburg who was laid off in June. Her husband's salary is not enough to make their mortgage payments. I met older people concerned about health care and Social Security and younger people in college concerned about whether they will have jobs and how hard they'll have to work to pay off debts (personal from college loans and national from Bush's deficits). In the Poconos I talked to a "typical redneck" who's convinced we need a change so badly he's ready to try "that guy" - Obama. There was the working class guy at the Chinese restaurant in Allentown. "I'm a Republican," he said, "but we can't take any more of this." He asked for an Obama button and went out wearing it. I met a pregnant woman whose husband is
1 comment
Read more
More posts