July 06, 2010
Martin Luther King, Jr. often referred to the parable of the Good Samaritan (Luke 10:25-37). While King’s interpretation of the parable evolved over time, he maintained a consistent focus on the way the parable allows us to examine the obligations owed to one another, provided an enduring way to read this text.

Often taken for granted, the waylaying of the traveler is what makes the parable possible.

Predatory behavior has bedeviled human history, and King gave a number of examples ancient and modern: slavery, colonialism, street crime, even preachers’ playing on people's religious desires in order to line their pockets. King’s fury was evident as he recited again and again the robber’s credo: "What is thine is MINE! And if you don’t give it to me, I’ll take it from you."

The priest and the Levite evoke some sympathy. Not only does King understand something about religious professionals, they seem to have very ordinary motivations. The Jericho road through the Judean wilderness was known for its dangers. Are the robbers still near? Is this a trap? If they touch the man, whether he is dead or alive, they will become unclean and thus unfit for their duties at the end of their journey. And if the man is dead already, what sense is there in stopping?

We know this philosophy, this way of living. Yet King indicts this attitude of cautious self-preservation, using Biblical stories, 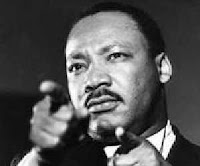 including his favorite parable of the rich man and Lazarus. (King inherited much of his thinking on this parable from the great preacher Vernon Johns, his predecessor at Montgomery’s Dexter Avenue Baptist Church.) It was not his wealth which sent the rich man to hell, but his failure to see the plight of his neighbor Lazarus, whom he passed by every day. And this attitude is found not just among the most powerful. It was in Dr. King's congregation, it is in our churches, it can be found whenever our time, talent, and treasure are devoted to the philosophy which segregates peoples' needs and gifts, letting some live in prosperity and others in poverty.

Whether unconscious or studied, indifference to the needs of our neighbors fixes a great gulf between us and our neighbor, and thus between us and God. King expressed this as the working out of a familiar idea: “What is mine is mine, and what is thine is thine.”

Of course, the parable makes clear that the Samaritan, the one who does not pass by, the one who risks himself and gives of himself, is the true neighbor of the wounded traveler.

King, noting that the merciful stranger was of a different race* than the wounded traveler, also notes that he lives by a different principle from that of the robber or the passersby. This Samaritan, this good neighbor has somehow come to know that "What is mine is thine." Like Albert Schweitzer, peace corps volunteers, and those working and marching and dying for civil rights, the Samaritan understands that "all humanity is tied together." Neither predators nor passersby can be safe in a world where misery, famine, plague, and hatred are the scourge of millions. These ills are contagious, you know...

"He who lives by this philosophy lives in the kingdom NOW!", not in some distant day to come. This is the witness of Jesus, "who said in his own life 'what is mine is thine, I’ll give it to you, you don’t have to beg me for it.' This is why the cross is more than some meaningless drama taking place on the stage of history. In a real sense, it is a telescope through which we look out into the long vista of eternity and see the love of God breaking forth in the night.... It is God saying 'I will reach out and bridge the gulf that separates me from you.'"

For King, the Samaritan neighbor has flipped the implicit question asked by the passersby (what will happen to me if I help?) and acts on the question "what will happen to the wounded stranger if I don’t help?" It is this, and his effective action to render aid, take the wounded traveler to safety, and subsidize his treatment that makes the Samaritan a good neighbor.

Later on, King came to enunciate yet another view. You might call it a development of the "Good Neighbor" philosophy, a prophetic perspective, or even a God’s-eye view.

King made use of his own experiences to understand something about the parable.

"I remember when Mrs. King and I were first in Jerusalem. We rented a car and drove from Jerusalem down to Jericho. And as soon as we got on that road I said to my wife, 'I can see why Jesus used this as the setting for his parable.' It's a winding, meandering road. It's really conducive for ambushing. [The road descends nearly 3000 feet in elevation over only 20 miles between Jerusalem and Jericho.] That's a dangerous road. In the days of Jesus it came to be known as the 'Bloody Pass'" (King, April 3, 1968).

But King realized that the danger of these roads was not a feature of creation, but of social relation, and proposed a re-architecture of our social landscapes.

"A true revolution of values will soon cause us to question the fairness and justice of many of our past and present policies. On the one hand, we are called to play the Good Samaritan on life's roadside, but that will be only an initial act. One day we must come to see that the whole Jericho Road must be transformed so that men and women will not be constantly beaten and robbed as they make their journey on life's highway. True compassion is more than flinging a coin to a beggar. It comes to see that an edifice which produces beggars needs restructuring" (King, April 4, 1967).

There are many ways to improve the Jericho Road. One is to send Good Samaritans down it to rescue those in trouble. Another might be better policing to protect travelers. Another might fund a public works project to straighten out some of the most dangerous spots. And still another might be the transformation of society such that few are tempted to become robbers.

In this final step, King has gone beyond the parable, which was Jesus' goal in telling the story. Answering the question "who is my neighbor?" is only the first step. It is the way into the personal and collective transformation to which God is calling us. One might say that neighborliness is next to godliness. 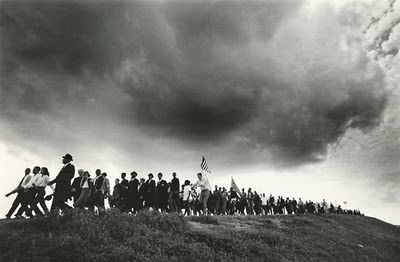 * NOTE: Some have objected to King "reading race" into the parable. While it is a commonplace of New Testament studies to understand Samaritans as an "other" to Jewish identity, not unlike blacks to American whites, the story itself contains a signifier that ethnic identity issues are present. Jesus identified the final traveler as a Samaritan. But when he asks the lawyer which was a neighbor to the wounded man, the lawyer answers "The one who showed him mercy." Not many interpreters have been able to find ambiguity in who shows mercy in this story. Is it a stretch to see the lawyer as unable to say the word "Samaritan" in praiseworthy context?

Unknown said…
Great summary of MLK's analysis of the world situation. I had never thought about how to prevent robbers before but it all makes sense. Heard a Kenyan Pastor recently speak on Eph 4:28 addressing Chistians not to steal. Why would Christians steal he asked? The answer is obvious.
December 29, 2011 at 5:38 AM