There isn't much to say today. The grief work begins in full swing. The Red Cross is running training for bereavement counselors 12 hours a day.

God's peace be with you.

On Tuesday 9/18 I was screened and trained to be a disaster chaplain. The "screening" and the training happened together and took not more than an hour in a group of 15 or so. I suppose you could have been screened out by answering a question dramatically wrongly, or seeming to be way out of kilter, but I don't think many got bounced at this stage.

There were a few things which stood out. I remember feeling pretty good that I was not unprepared for this. We got asked about some of the things that we expected would be part of our work, and I think I mentioned the complicated nature of loss in this very sudden and public way, maintaining a living connection to the dead, and paying attention to the here and now of people's emotions - including our own.

And there was something that underlined what would be happening. Most of the disasters in life are personal, on a smaller scale. The funeral home places a few strategic boxes of tissues, which are used one or two or a small handful at a time.

Stacked up against the wall was case after carton after case, each with its own few dozen boxes of tissues. When grief comes by the thousands and tens of thousands and hundreds of thousand, how many boxes do you need? 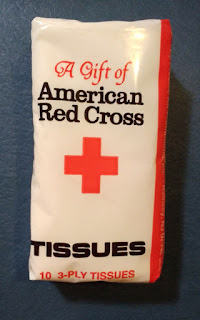 Those first tissues were donations from all over. A little later the standard issue version showed up.