Showing posts from January, 2019
Show all

A letter to those urging patience with injustice 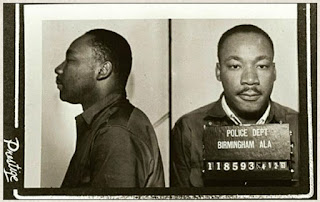 I was thrilled to hear Martin King's Letter from a Birmingham Jail read today on the radio. If the Church ever decides to add to the New Testament, this is my #1 nomination. Today we justly see King as a hero, but that was not how most saw him at the time. He wrote the letter on scrap paper, smuggled it out of jail, and the NY Times turned it down for publication. In the letter, King notes his stand in the prophetic tradition, but also his status as a "n-----r" and "boy" (and implicitly as convict). "At first I was rather disappointed that fellow clergymen would see my nonviolent efforts as those of an extremist.... But as I continued to think about the matter, I gradually gained a bit of satisfaction from being considered an extremist. Was not Jesus an extremist in love? -- 'Love your enemies, bless them that curse you, pray for them that despitefully use you.' Was not Amos an extremist for justice? -- 'Let justice roll down like waters and
Post a Comment
Read more
More posts