September 11, 2016
For me the anniversary day is a good time to hallow the memory of those who perished that day, and to remember those many ripples which spread from the attack: those injured, the families and communities of victims, the many thousands of responders.

One of the things that came through the most in my experience, was the ordinary goodness of most of the people caught up in this disaster. There are so many... 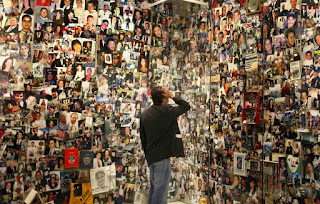 This picture is of a display at the Tribute Center, run by the September 11th Families Association, the principal interpretive center prior to the opening of the National 911 Memorial and Museum.
Far too many. I find it helpful to focus. Today, I remember...

Growing up, Abdu A. Malahi struggled to combine the traditions and culture of his native Yemen with the swagger of a kid raised in Brooklyn, one who loved Prince and played the keyboard in a makeshift band. He dreamed of becoming a recording engineer, said his childhood friend and bandmate Edward Perez, and it seemed that Mr. Malahi was finally able to reconcile those roles in his job as an audio-visual engineer at the Marriott Hotel.

His dedication was evident: if a conference or a meeting was not successful, Mr. Malahi "would take it to his heart," said his friend and manager, Vipan Khullar. On Sept. 11, Mr. Malahi ignored warnings to flee the building and stayed to help evacuate the hotel guests.

Mr. Malahi, 37, was a serious person, his father, Ali, said. His playful side came out only when he was with close friends or his wife, whom he met when he spent some time in Yemen a few years ago, and his two sons. His wife and sons still live there; Mr. Malahi was trying to get visas for them to come to the United States.

But his formality did not necessarily push people away. Sometimes it drew them closer. "He was so formal in his letter writing; he would always start with `Greetings,' " Mr. Khullar said. "Even if it was just a note to accept a meeting, he would say, `Greetings, yes, I will meet you at that time.' That's something that always impressed me about him."

Profile published in THE NEW YORK TIMES on February 10, 2002. 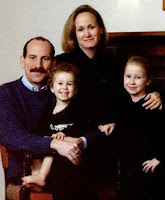 Charles and Leslie boarded American Airlines Flight 77 with their two daughters, Zoe and Dana, en route to Canberra, Australia, for what family members said was a dream, working vacation. Leslie, who was an Associate Professor of Public Policy and an Associate Dean at Georgetown University, was going for a short stint as a visiting fellow at Australian National University at Canberra. Charles was a gifted software engineer and scientist. An expert in developing software for scientific data management, he had helped measure the long-term impact of the Exxon Valdez oil spill, managed NASA-related databases and served as director of research for ECOlogic of Lanham, Maryland. Both were active in the PTA.

They were traveling down under for a once-in-a-lifetime trip. They had just moved out of their home, in fact they spent their last few days before 9/11 in a hotel, and upon their return to the states, were to move into a new house in Chevy Chase.

Known for her determination, intelligence and ambition, Zoe was a top student at University Park Elementary School. She was active in Girl Scouts, ballet and swim team. She appeared in the school’s production of “Brigadoon” and a local production of “The King and I.” She was greatly loved by her friends, teammates, teachers and her friends’ parents. Dana was a robust, curly-haired girl, who was seen as a miracle by her parents. She was intense, funny and a charmer. She celebrated her third birthday on July 21, 2001 with her Falkenberg grandparents. They accompanied their mother to work often enough that her coworkers had fond memories of their visits, particularly of Zoe’s flamboyant outfits. 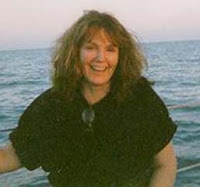 Debbie Paris, an executive assistant, scheduled her bosses' flights, kept their calendars and managed payments, construction, staff and insurance on their three yachts and several homes — to list some of her duties. "When I needed an autographed photo of Sting," said Suzanne Murphy, a colleague, "I called Debbie. `No problem,' she said."

When Herman Sandler, president of Sandler O'Neill, bought his yacht, he turned everything over to Mrs. Paris, saying, "Let me know when the money runs out." She did the rest, from hiring a captain to paying the marina. No Problem was his name for the boat — fitting, no doubt, from his point of view, but only because of Mrs. Paris. Mr. Sandler, too, died on Sept. 11.

At home, she managed the gigs for Jimmy, her husband, a rock musician, and was helping him with an album. "She was his muse and inspiration," Ms. Murphy said. Mr. Paris put it more strongly: "She was like my wife, my child, my mother, my best friend," he said. "And I was a husband and father and child and brother to her." Even now he will not reveal her age. "Just say," he said, "she looked 15 years younger than she was."

Jayesh Shah and his brother were always close, whether the family lived in India or Wisconsin or Tulsa or Houston.

They went to the same college. They took computer science classes together in graduate school. "I was a terrible note-taker, and Jayesh was a great note- taker," said Niloy Shah, his brother, younger by a year. And when Jay Shah got married, the newlyweds lived with the younger brother and his wife for months.

Even after Jayesh Shah moved to New York last year, to work at eSpeed International, a division of Cantor Fitzgerald, the brothers talked almost every day.

Mr. Shah, a strong believer in education, wanted to be sure the move would not disrupt his children's schooling, so Mrs. Shah and the children remained in Houston until school was out. Each child has a favorite memory of time with their father. Nikita, 10, loved horseback riding in Yosemite. Sonia, 8, loved the "Sling Shot" ride at Seaside Heights. Kevin, 6, loved wrestling with his dad.

They and their mother — and Mr. Shah's mother, who is staying with them — will return to Houston. But education remains a family value, and they will not leave for Texas until June.

Profile published in THE NEW YORK TIMES on December 23, 2001.

From the NYC Office of the Chief Medical Examiner... 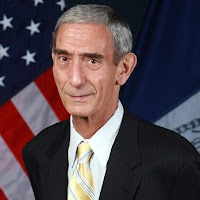 “Dr. Charles Hirsch, the long-serving Chief Medical Examiner of New York City and a towering figure in the field of forensic pathology, passed away on Friday, April 8, 2016, at the age of 79.

“Dr. Hirsch presided over the transformation of the Office of Chief Medical Examiner (OCME) into a national leader in forensic pathology, and led the agency through the unprecedented task of identifying victims of the World Trade Center disaster.

“On 9/11, Dr. Hirsch raced to the World Trade Center with several OCME staff members, and was present when the North Tower collapsed. He was injured, and would only learn later that he had broken every rib, but he promptly returned to the office that same day, covered in soot. In the following days, weeks, and months, Dr. Hirsch led OCME through the process of investigating and identifying the victims of the largest homicide in U.S. history. The work to identify the 2,753 victims of the disaster continues to this day, just as he pledged to 9/11 families.”

I had the privilege of working as a Chaplain for OCME in the years following the closing of the World Trade Center site. Early in the process, Dr. Hirsch realized the need for spiritual care for his staff and the 9/11 families they worked with. He is universally and rightly praised for his skill in forensic pathology, as an effective leader, and for his kind and gentle presence even in the most difficult circumstances. He radiated calm and encouraged confidence. Dr. Hirsch was one of the many right people in the right place on September 11th, and I am grateful to have known him.