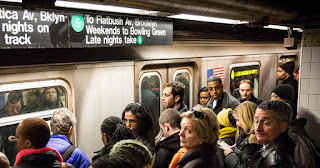 Apologies, I know this is not directly on topic for the list.

But there is a definite sense of people seeking more and more to return to the usual, the ordinary. This is a partly a response to the terrorism. Partly a need for the comfort of the familiar, which we can cling to in the face of tremendous upset. And partly the simple need to get on with life. We still need to walk the dog and get groceries and do the laundry.

One fellow student told how she was on the subway, and for the first time since Tuesday, it was crowded, and there was a little jostling and attitude. She was just married this summer, and her husband was on the streets near the Trade Center on Tuesday. She thought, "What a luxury it is to be impatient, to be able to rush home to your loved one."

Tonight, after I led a worship service at noon, and class from 2-6, Lisa and I went to a candlelight gathering at the Firefighter's Memorial, which happens to be nearby. Afterwards we walked over to Broadway, looking to grab dinner.

Two blocks later we spied the Afghan Kebab House. Its name caught my eye, and I noticed they were open, but the dining room was empty. Other restaurants were packed. An American flag hung in the window, and smaller flags decorated the dining room.

We had a lovely dinner and, as you might guess, excellent service. We also had a conversation with the proprietor. In true New York fashion, it's run by Pakistanis, New Yorkers since the early 80s, and the kitchen is staffed by Mexican & Central Americans.

Due to the restaurant's name, they are currently doing almost no dining room business. His brother's restaurant in midtown is doing almost no business at all, and has been getting hate calls as well. But they decided that they must stay open. Not only to try and earn a living, but to close would seem as if they'd done something wrong. "We love this country, our life is here." It might not need saying, but it had better be said anyway, that he was just as upset at the recent terrorist attacks as any other New Yorker. "My mother was crying all day," he told us.

We talked about some of his experiences of the past days, which involved the same kind of heartsickness and confusion seen all over this city and nation. Yesterday, he got home late, 1am, and his wife had no milk in the house. "OK, I'll go to Waldbaum's" (supermarket), he said. On the way, he saw a band of 20-30 boys, high school age and up, carrying American flags and cheering, chanting, "patriotic" sentiments. He detoured so he wouldn't have to cross their path. "Why take a chance? Why tempt them?" he asked. It's the same reason he has an "OPEN" sign in the door, but hasn't turned the lights on for his "AFGHAN KEBAB HOUSE" sign. I wonder how long will he feel he must stay in the shadows?

A little historical note: In 1916, the U.S. had a thriving German ethnic culture. In many neighborhoods German was an American tongue. In 1917, after the U.S. entry into WWI, German shops were destroyed, despite the American flags they hung in their windows. German-Americans were beaten and killed in mob violence. Sauerkraut became "Liberty Cabbage," the German language a mark of shame. By the end of the war, German-American culture effectively disappeared from the American mainstream. (Yet as a pseudo-underground, the German-American Bund became a fertile breeding ground for the support of fascism.)

"Those who don't learn from history are condemned to repeat it." I pray that our generation will at least make different mistakes.

Please consider patronizing "Arab" and Muslim businesses. You'll be supporting your neighbors in a difficult time - and you'll get great service.


The restaurant was actually Afghan Kebab House #5, located at 2680 Broadway at 102nd St, no longer at this location. One of the flagrant details was a sign which featured the map and flag colors of Afghanistan.

Middle: Dachshunds were temporarily re-branded as "Liberty dogs" while being used as anti-German image (and interestingly, contrasted to the virtuous American pitbull). Right: German-American farmer whipped and covered with tar and feathers near Luverne, Minnesota, August, 1918.