September 12, 2016
I returned home later Tuesday night, 10? 11pm? I don't remember what the rest of the night was like, I'm sure I was up late, and sometime before I got out the next morning, I read an email from a pastor I did not know condemning Islam. (The pictures are not of course, original to the email.) 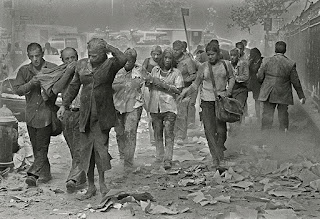 > Make no mistake about it,
> Islam is a religion of hatred
> and violence. Islam is the
> enemy.

Terror seemingly knows no bounds. Thoughts like this give me terror, and cause me to fear for our nation's soul. It seems all too much like the thinking that led to yesterday's brutality. We do not ourselves have innocent hands, for we too easily hate. And the hate always seems to find an Other. But the same kind of statements could be made and defended about the tradition we have inherited, and about our scriptures. Pastor [name redacted], please take another look, and take this to our Lord Jesus.

At New York University we share a building with the Catholic Center and the Islamic Center. Yesterday we received phone calls which indicated the need to find someone to blame. Our offices are closed due to security concerns about misguided "warriors" seeking revenge.

Thank God for Hassan, our Muslim security guard, one of our most faithful helpers, who chose to break the rules and allow us to open the chapel and keep the doors open well into the night.

People came by in ones and twos, in small groups. Mostly they wanted to sit for a minute, to pray, to reach out to God, to be some place that could begin to hold the enormity of yesterday's events.

So there was a lot of silent prayer. Some quiet tears, and some deep sobs. Every few minutes we would read some scripture out loud.

I lift up my eyes to the hills -- from where will my help come? My help comes from the Lord, who made heaven and earth. (Psalm 121)

As Jesus came near and saw the city, he wept over it, saying, "If you, even you, had only recognized on this day the things that make for peace!" (Luke 19:41-44)

We are afflicted in every way, but not crushed; perplexed, but not driven to despair; persecuted, but not forsaken; struck down, but not destroyed... (2 Corinthians 4:7-18)

For I am convinced that neither death, nor life, nor angels, nor rulers, nor things present, nor things to come, nor powers, nor height, nor depth, nor anything else in all creation, will be able to separate us from the love of God in Christ Jesus our Lord. (Romans 8:18-39)

And we would occasionally give voice to a prayer. For our fears. For a world where this kind of thing can happen. For the many, many people affected. Those hurt and killed. Those who are missing loved ones, hearts breaking with worry. Children whose parents will not be coming home. Emergency workers striving to pull life from this disaster.

It can be a heart-rending blessing to be in ministry. I heard the story of a young woman, married one month. Her husband worked in the World Trade Center, and she had been talking to her husband on the phone when the plane hit. She hadn't heard from him since then. Please pray for this couple, and the many others separated by brutality.

I talked with a young man who was working next to the Trade Center when the planes hit. He felt the heat through the window glass. One of his buddies was outside, as people were jumping to their deaths to escape the fire in the tower, landing all around him. After locating most of the folks from their office, this young man made his way uptown, and looked for a church that was open. "I needed to break down and cry." Please pray for him, and for the many like him.

On the way home, I met a firefighter in the Columbus Circle subway station. He looked shellshocked. I touched him on the shoulder and said "God bless you. A lot of people have been praying for you today." We talked for a bit. He said one of the hardest things was that there was so little he could do. Too much rubble, too much devastation, too few people accessible for rescue. He went downtown with a group from his stationhouse, but was returning alone. 265 firefighters missing. Please pray for Ralph, and the many like him.

There are hundreds of thousands more stories. Please pray for this city, this nation, this world. Over the coming days we will trace the chains of cruelty, hate, and indifference which brought this about. May we also trace the threads of love that will lead us out of this horror. The overwhelming number of people who turned out to give blood. The sacrificial love which led so many to risk -- and lose -- their lives to help others.

God be with you, and with our nation, that we are not possessed by a spirit of vengeance. Loving our enemy is much harder than that. May we take the narrow and difficult road, the much harder work of mourning, of repentance, and even, by the grace of God, forgiveness.

In the name of Jesus, our rock and our redeemer, 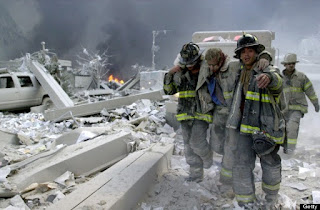