Showing posts from September, 2014
Show all

Remembering them, one at a time

One of the things that most impressed me in the WTC recovery work was the ordinary goodness of so many lives. The New York Times' Portraits of Grief are brief clips of many of the people who died that day. Each 9/11 it is good to review a few of these neighbors. MULTILINGUAL AND MULTINICE Eli Chalouh Fluent in Arabic, Hebrew and English, Eli Chalouh, 23, moved easily among the diverse communities to which his languages gave him access. He spoke Arabic at home, of course: he moved here with his family from Damascus, Syria, when he was 14. At his new job at the New York State Department of Taxation and Finance, in the World Trade Center, he spoke Arabic with his Egyptian colleagues, who got a kick out of him. Mr. Chalouh was not Muslim; he was a Syrian Jew, who learned Hebrew at the yeshiva he attended in Brooklyn. America was the country he wanted to wrap his future around. He was always in a rush, determined to cram every moment with English studies and other courses: he w
Post a Comment
Read more 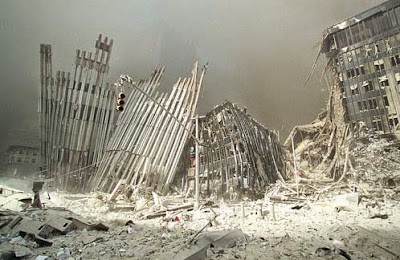 It was thirteen years ago. Devastation came to my neighborhood. World Trade Center, 9/11/11, photo by James Nachtwey I remember my first trip by the site the following week. The smell that hung in the air. The shocked, hard faces of the soldiers who stood guard along Broadway. The glimpses of the wreckage one block over. And my fellow citizens filing by, a commuting crowd unlike any other I'd seen. The attacks of that day soon led to more attacks. Thirteen years later, we are in a seemingly perpetual war. The wounds of 9/11 were used to justify more attacks, including the evil disaster that was the invasion of Iraq. Now a new American President is calling for a re-engagement in Iraq and escalation of warfare in the region. Colin Powell had the right idea - "you break it, you own it" - but America has never owned up to our responsibility for breaking Iraq, for breaking the troubled political balance of the Middle East, or for unleashing the dogs of war which have
Post a Comment
Read more
More posts