We do big things 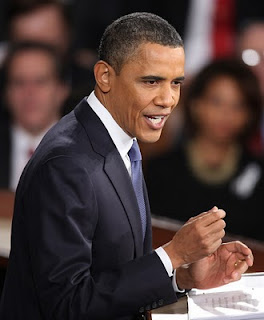 The commentators are so totally not going to get this. Amazing, and a very odd moment in American oratory. I think people were paying attention, while Obama said things that were hard to disagree with in a way that confounded the folks in "the Chamber." The folks in "the Chamber" (the Congress, the 24-hour media "echo chamber," the Chamber of Commerce?) didn't quite know how to react. It was Sober. Most of this plays very well outside the Beltway, and on my block. A lot of folks will listen to this. Amazing! We do big things.

Did you hear that? No retreat on health care. You got an idea? Put it out there baby!

Did you hear that? Dream Act on the one hand.. Let's talk "illegal immigration" on the other. I dare you... let's do immigration...

Freeze annual domestic spending for the next five years? Say what? You think any Congress will do this? I dare you... mess with my budget...

Did I mention tax cuts for the wealthiest Americans?

"This year...we finish the job of bringing our troops out of Iraq. America’s commitment has been kept; the Iraq War is coming to an end."

One big question... Afghanistan... Missing is the plan for that war coming to an end.

And God, bless 'em, "Plan B," guts and ingenuity and the miracle. We do big things. 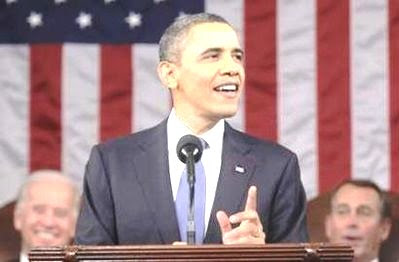 We do big things.
Text of President Obama's State of the Union Address, January 26, 2011.