To the church of God

Paul’s first letter to the Corinthians is the appointed second reading for most of the Sundays in Epiphany, with Year A containing portions of the early chapters (1-4), Year B the middle chapters (6-9), and Year C some of the later chapters (12-15).

The interpreter has some basic choices to make in approaching these texts. The letters are intensely personal and address very specific concerns of Paul and the assembly of believers in Corinth. One approach to their interpretation is to try and understand this context as well as possible. In drawing conclusions about what faithfulness looked like in that setting, we might have an idea of what faithfulness looks like in similar circumstances.

Another approach may look at the historical setting of the letter, yet recognizes that the letter now has a canonical context. The church has made use of this text in ways which go well beyond its original setting.

These reflections will focus more on the latter approach, using the basic outlines of the historical setting to inform how the text speaks to congregations and believers today. While the issues faced by the Corinthian church are not exactly the same as those in current congregations, the broad issues may be recognizable: power and authority in the community, exercising spiritual gifts, idolatry and the relationship to non-godly powers in daily life, intra-community conflict.

In the church today, we also chop these letters up into pieces, reading only a short segment in each worship service, rather than hearing the whole letter at a sitting, as if it were sent direct from the apostle to us. Most preachers will thus try to stick close to the words and ideas contained in each reading, since the congregation will have only heard that portion.

Having read the whole letter, one can then go back to the initial salutation for clues or signs about Paul’s overall proclamation. In the opening salutation of First Corinthians, the Apostle briefly foreshadows themes that he will come back to:
+ The transformative nature of Christ’s call (“to those who are sanctified in Christ Jesus, called to be saints,” v2);
+ The unity of the whole church: the Corinthians are not isolated in their faith, but are “(together with all those who in every place call on the name of our Lord Jesus Christ,” v2);
+ His own authority to teach, to encourage, to chastise (“called to be an apostle of Christ Jesus by the will of God,” v1);
+ The grace of God, which is manifested in spiritual gifts given to the Corinthian church and its members (v4-7);
+ Faithfulness in preparation for the time of Christ’s return (“that you may be blameless,” v8);
+ And perhaps most important, reemphasizing the call of Christ to all believers, which is rooted in the proclamation that “God is faithful” (v9).

Each of these points is a starting point for preaching, and might be rephrased in the form of questions. What does Christ's call mean in our lives? How does fellowship in Christ connect us to other members of his body? What does it take for us to exercise the authority given us - how do we "step up" to God's call? How are we enriched in Christ? What are, and how are we using our spiritual gifts?

One of these will usually jump out and call to the preacher as a lively issue for this time and community.

I think that central to Paul was this last point - that God is faithful, even when we are not. God's grace calls to us even when we are most alienated from God. Recalling, for example, that time when he was a persecutor of the church, and God called him out, and into a new life of mission and blessing... As we read through the Corinthian letter, Paul is most unhappy with how they have gone astray, and locates this problem principally in people's failure or inability to trust 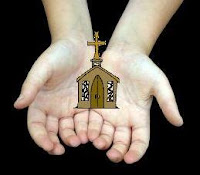 in the redeeming power of God. This is an opportunity to be in touch with those times when we have felt abandoned by God, or been unable to trust in God's faithfulness and care.

Paul has been there, and will go on in this letter to preach Christ crucified, the way God has turned the world upside down. Yet without abandoning God's promise of care for God's own.

For other resources for preaching this text, see Textweek.com.

Thanks to Rev. Elsa L. Clark for helping me think about this text.