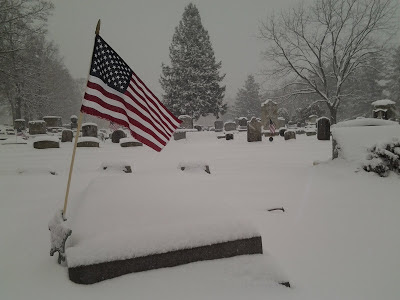 A few days ago, the snow was falling and I paused for a brief walk through an old cemetery. An interstate highway runs by it, but it was quiet and unnoticed. Some of the headstones were decorated with small American flags, and many had small bronze stars denoting the deceased as veterans of the Grand Army of the Republic, fighting on the Union side during the American Civil War.

This year has seen a renewed focus on honoring our nation's military veterans, especially in providing some measure of services to help those who have been physically and emotionally wounded.

As this year ends, this nation has been at war for more than eleven years in Afghanistan. (By contrast, the U.S. waged the Civil War for four years, World War II for 3 2/3 years, and World War I less than two years.) Few anticipate the true the costs when the blood runs hot and war seems to be a national imperative. And as the soldiers die and are wounded, it becomes difficult to end a war whose justification now depends in part on "honoring their sacrifice," that the cause which killed and maimed must be pressed forward to victory.

Yet the justification for this war is long past. It is time. Time to honor the dead. Time to heal the wounded. And time to end the war.

May God bless and keep all those in military service, that they may be kept from harm and serve with humanity. May 2013 be a year when old wars and and new ones are not begun.