Sometimes when we think we know a story, we can be oblivious to the power concentrated below the surface. The stories themselves might even glance over things which can shake our foundations.

Like the story of Paul and Silas. It’s known so clearly and truly as a sign of divine action, bringing God’s people out of captivity. We recognize this story, having heard it with the Hebrew slaves in Egypt, the return from exile, and Jesus’ resurrection from the dead. We long for this story, in the hope that we too may be delivered from persecution, trial, and captivity. In the middle of the night, when Paul and Silas were praying and singing praises to God, “a strong earthquake shook the jail to its foundations. The doors opened, and the chains fell from all the prisoners” (Acts 16:26, CEV). Hallelujah!

But after China, Chile, Haiti, just this year... can we read past the destructive power of an earthquake? A quake strong enough to shake the foundations of the jail is strong enough to flatten many other buildings. The text doesn’t tell us, so God only knows what is going on outside.

Inside the jail, it seems that Paul’s and Silas’ faith is unshakable. But the jailer may be a more compelling character for us. The earth quakes, and so does he.

Earthquakes literally shake foundations. The earth is the one thing we normally know as certain, solid. It holds the weight of our bodies, our belongings, our buildings. And in an instant, what we have relied on as “rock-solid” is shaken, unstable.
Santa Barbara County Jail after earthquake of June 29, 1925
We know for sure that the jailer was distressed. He certainly feared the consequences of these prisoners escaping. But we should not discount the traumatic nature of the solid earth shaking, and the solid symbol of human rule – the stone walls of the prison – now broken open.

Disciples of Jesus knew this story, too. They’d seen the solid rule of Rome and the Temple system crack open. Even the solid stone tomb of death could not hold against the name of Jesus.

Maybe in this light the prisoners’ faith makes more sense. They can proclaim “Have faith in the Lord Jesus and you will be saved!” (Acts 16:31, CEV) because their own world had been shaken, and they have known the Lord’s steadying hand, a love that was stronger than persecution and death. They knew God as the one foundation that cannot be shaken.

In the face of calamity, a confident and sure voice can speak deliverance. The jailer hears. The man who had been afraid that his prisoners would escape now leads them out of jail himself. After washing their wounds, he lets Jesus wash his, in baptism. And his household, which may have been shaken, is now set on a new foundation, 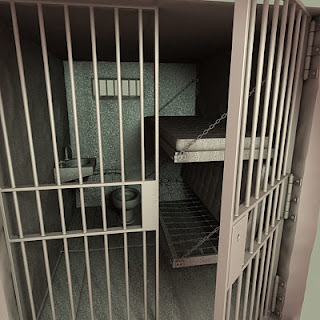 seen in the hospitality he extends to those he had imprisoned.

Prayer, praise, and faith in Jesus still shakes the foundations of all that is false, sick, and built on sin. And it will continue to do so until all the captives are released.

Pink Fuzzy Slippers said…
This calls to mind Tillich's Shaking of the Foundations, and not just because of the title--perhaps what the prophets saw and foretold can be and is becoming historical reality.