At our house we would raise the flag and fly it for the day. Then at sundown, I'd play taps on my cornet. The sound would roll over the gentle hills and woods of our neighborhood. Then the flag would be lowered. My dad and I would fold it, and it would be taken inside for the next patriotic holiday.

Some years we would travel a piece down the road. At a serpentine bend, there was an old farm path with a rusty gate. 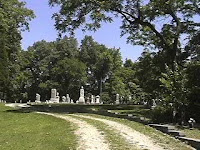 Follow the path over the hill, past the pasture land and back into deeper woods and gullies, and you'd come to Coldwater Creek, where there was a cemetery. This was back in the late 1960s, when America was coming apart at the seams, as some of our best sons and daughters came back from Vietnam, many thankfully alive, too many damaged, and so many dead.

Some folks, I imagine the VFW and American Legion and I think some county politicians, had raised some money and done some work to beat back the woods and cut the grass, and there were American flags in front of many headstones, and red white and blue streamers decorating a platform for speeches. Some of the military graves went back to the veterans of the Revolution, and of course every war since then.

I remember vividly the hot early summer day, the carnations and bouquets of flowers, the bright green grass and the cool dark under the old trees by the creak, which softly trickled along all these many years. The colors of the flags stood out sharp against the colors of earth and growing things and the bright sky. I remember it bright and clear, even though sometimes it rained...

Of course I could not tell you anything that the speakers said. I’m sure they recognized the service given by past veterans. 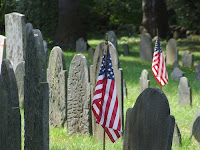 But I remember like it was today the mystery of those gravestones, and the honor paid by the living who took the time - no doubt for many different reasons - to remember a portion of those lives now gone. I hope we trod lightly upon their resting place - but I am glad to have taken the time to know their bodies rested in this quiet and beautiful place, still remembered in spirit.

It was only later that I came to know something more about sacrifice, and the godawful destruction of war. I know that there are many kinds of hard and dangerous service, and that it takes more than military effort to make a people or a nation free,

But somehow my thoughts about war don't seem nearly as deep as what stirs when I remember those tiny flags in the cool earth... the tribute paid by going to an out of the way memorial ground to remember those who died serving their country... the holy air coming out of that cornet as each note tried to call the world to attention, to face those we owe, and salute their memory.

Wishing you blessings of peace this Memorial Day. 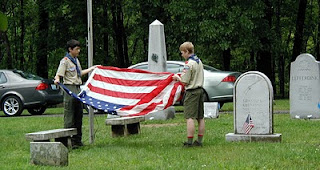