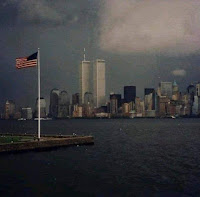 On the morning of September 11, 2001, somewhere between sleeping and wakening, I think I heard a low flying jet above me at 121st Street and Broadway. When I awoke and left my dorm room, Trevor said a plane had crashed into the World Trade Center. I went ahead to my first class of the new semester, on Aggression.*  I was there when the north tower fell, and the word came that classes were cancelled.

Over the next few years, I was exposed to a lot of prayer.

I remember the noon chapel service that day, and words of scripture,. And I especially remember John McGuckin in his cassock, standing off to the side in a corner of the chapel with prayerbook in hand, offering a silent witness of prayer while others spoke and sang.

When there was no need for blood at St. Luke’s Roosevelt, I went downtown to NYU Chapel, where I had just finished my internship, and arrived just as the priest was leaving after a very hard day. Hassan, our Muslim security guard, graciously allowed me to stay and keep the doors open, and there I prayed as others wandered in for refuge, for company, for rest, for a place to sit with what they had seen and heard. Shock, stories, prayers, fears, tears were shared in the sacred space.

Coming home on the subway I met a firefighter in the Columbus Street station. He looked shell-shocked. He said there was so little he could do. He went downtown with a group from his firehouse, but was returning alone. Ralph’s story is a prayer.

As Jesus came near and saw the city, he wept over it, saying, "If you, even you, had only recognized on this day the things that make for peace!" (Luke 19:41-44)

Over the next days and months, as I was given the grace to be a chaplain, each day as I would enter and leave my site, I would linger some moments at the walls filled with pictures and flyers of those who were being sought, the holy missing. My prayer was to touch the paper, to see their faces and whisper their names to my heart.

In October there was a memorial service for families at the still-smoking World Trade Center site. While prayers were spoken by religious dignitaries, I found prayer in "Almonds and Raisins," a Yiddish lullaby. And then someone came seeking help. A father grieving his young son. We sat together in a golf cart parked outside a closed deli on Vesey Street. He shared something of his story and his son, through sobs and silence. At a time I asked him if he would like prayer, and as I began to pray, I was startled as, phrase by phrase, he repeated those words as his prayer. Perhaps I was only repeating the words given to me, for the Spirit helps us in our weakness.

Many more prayers were said over the coming months. After the World Trade Center site was officially closed, I was not ready to go home, even though life, of course, continued. I became a chaplain for the Office of the Chief Medical Examiner, charged with identification, preservation, and care of the human remains found following the attack. 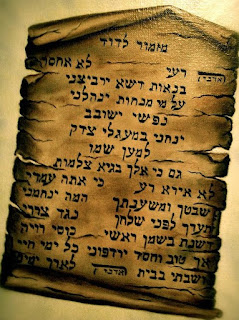 I heard the story of a group of Jewish women, students at the nearby Stern School of Business. The Jewish, and especially the orthodox community, had been acting as shomerim, or "watchers." In Jewish tradition, a shomer watches the corpse of the recently dead, and reads psalms, while the community prepares for burial, normally as soon as possible after death. On the Sabbath, many men who served as shomerim could not travel to the morgue. So the women came, and watched, and prayed the psalms in the presence of the numbered body parts. So when I came to the big white tent filled with refrigerator trailers, I followed in their footsteps.

The Lord is my shepherd...

What profit is there in my death, if I go down to the Pit?
Will the dust praise you? Will it tell of your faithfulness?
Hear, O Lord, and be gracious to me!
O Lord, be my helper!

Prayer is not the only response to crisis, to life and death. But it is a true response.

There were uncounted other prayers, spoken, silent, with groans and weeping and song. And there were so many prayers that were lived, in acts of kindness, courage, generosity, and yes, sacrifice.

I give thanks for those many people weaving together the cloth of community and healing.

May Almighty God hold as holy every life taken by violence, every action taken to care for one another, and every good work to seek healing.

* The professor of that class, Ann Ulanov, together with her husband Barry, wrote a short book on prayer which has been influential to me (Primary Speech: A Psychology of Prayer, 1982). Prayer is not about rules; there is no right way to pray. Both psychoanalysts, they see prayer as potentially a whole body and whole spirit enterprise. Wherever and however you may locate the holy, prayer is deep communication involving our conscious and unconscious, the visible and the secret. Prayer is not limited by space and time. Prayer is about this communion between the varied parts of ourselves and with an Other.