September 07, 2020
When you're a boy in growing up in St. Louis, you learn about baseball. My Dad took me to my first baseball game in 1963, at the old Sportman's Park, to see the great Stan Musial play in his last season. I was a little young to understand what was going on, except that it was a Big Deal. Baseball was Important.

I missed the 1964 World Series, but by 1966 or '67 I was playing ball myself and was, of course, a Cardinal fan. And what a time that was. In '67 they would win the World Series, and in '68 lose in a dramatic Game 7. It was a solid team, with some of the best players of the day and some for the ages. The '67 team was managed and general managed by future Hall of Famers (Red Schoendiest and Musial). Dal Maxvill, Julian Javier, Mike Shannon, Orlando Cepeda in the infield. Tim McCarver behind the plate. Two Hall of Famers in the starting rotation, Steve Carlton and the great Bob Gibson. Roger Maris and Curt Flood in right and center field. And the thrilling, exhilerating, and often accelerating Lou Brock. 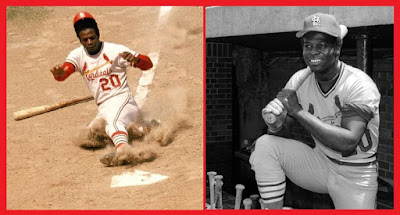 But it was on the basepaths that he took your breath away. He broke Ty Cobb's all-time major league stolen base record, a record which had stood for 51 years. Brock led the National League in stolen bases for a record eight times and also had a record 12 consecutive seasons with 50 or more stolen bases.

But it was more than the records. When Brock was on base it was electric. You always thought he would steal. He would crouch and stretch a lead, every lead a dare, and often unsettling the pitcher. Brock is quoted as saying "The only way to be sure I don't steal is to keep me from getting to first base," and watching him made you a believer.

Growing up in rural Southern poverty, Brock did not play organized baseball until the 11th grade. Five years later he was in the big leagues. He had a dynamism that brought excitement every time he was in action.

Brock's teammate from 1968-77 and fellow Hall of Famer Ted Simmons, said he'll remember two things about Brock. "First was his vibrant smile. Whenever you were in a room with Lou, you couldn't miss it -- the biggest, brightest, most vibrant smile on earth. The other was that he was surely hurt numerous times, but never once in my life did I know he was playing hurt."

I am grateful for the example of excellence he and his teammates provided when baseball was a metaphor for life. He knew how to pick his moment and go all out for it!