A decree went out 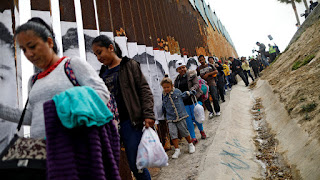 This was the first registration and was taken while Bashar al-Assad was governor of Syria. (Or was it Quirinius? So many governors...) All went to their own towns to be registered. Maybe that's where the original papers were. Or maybe it's because once you're a Judean, always a Judean, once a Mexican, always a Mexican. Once a Kurd, an Eritrean, a Cambodian, a Yemeni... you get the idea. The Authorities said you'd better get the idea. 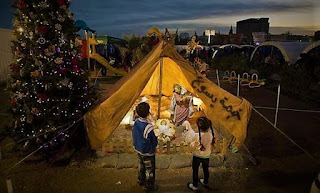 Joseph also went from the town of Nazareth in Galilee to Judea, to the city of David called Bethlehem, because he was descended from the house and family of David. He went to be registered with Mary, to whom he was engaged and who was expecting a child. While they were there, the time came for her to deliver her child. And she gave birth to her firstborn son and wrapped him in bands of cloth, and laid him in a manger, because there was no place for them in the Land of Promise. The border was closed. There was a waiting list for the refugee camp. The cheapest motel wouldn't take their money (Luke 2:1-7, adapted).

The old story is still familiar, and not because we heard it in church, but because it is still in the news. A decree went out. "Muslims not welcome. If you speak Spanish, or an indigenous tongue, you're not welcome. Shithole country - not welcome. Poor - not welcome. You'll never be welcome. Whatever horror you are fleeing - not our problem and you are NOT WELCOME."

The good news is that there is another decree, a more righteous, more just, more hopeful, more glorious, more enduring, and far more authoritative decree. 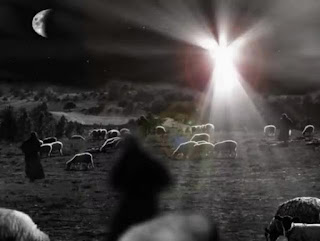 In that region there were shepherds living in the fields, keeping watch over their flock by night. Then an angel of the Lord stood before them, and the glory of the Lord shone around them, and they were terrified. But the angel said to them, “Do not be afraid; for see—I am bringing you good news of great joy for all the people: to you is born this day in the city of David a Savior, who is the Messiah, the Lord. This will be a sign for you: you will find a child wrapped in bands of cloth and lying in a manger.” And suddenly there was with the angel a multitude of the heavenly host, praising God and saying, “Glory to God in the highest heaven, and on earth peace among those whom he favors!” (Luke 2:8-14)

The Emperor, The President, the Governor, the Senate will not even listen to those poorer than poor, dirty, lonely shepherds, much less believe them.

But God's decree is that those kingdoms always fall. There is never a moment where God does not stand with the lowly, and stand against the oppressors. "Fear not! I am bringing you good news of great joy!" Believe in that little baby if you want. But whatever you do, believe in that word of light shining in the darkness. Evil cannot win. Cruelty is a dead end. And while the powerful are plotting, trapped in their gold-plated corruption, love is always being born into the world.

Postscript:
Lest you think this story is all about God and angels, pay attention to what happened next. Those poor outcast shepherds went to see for themselves. They found the heavenly message to be true. They told the story to any who would listen, glorifying and praising God for all they had heard and seen. God's hope is better rooted in the fields and the barrios than in palaces and resorts. True then, true this day.

I am the true vine, and my Father is the vinegrower. He removes every branch in me that bears no fruit. Every branch that bears fruit he prunes to make it bear more fruit.... My Father is glorified by this, that you bear much fruit and become my disciples. John 15:1-2,8 Much of the comment and preaching on this passage focuses on its role as one of the great "I am" passages that John relates. "I am the vine," says Jesus, "and you are the branches." And we rightly think about Jesus as the connective tissue between his disciples, and as the source of nourishment, bringing life-giving water and nutrients to the branches. Vines are amazing plants. They are prolific, productive. They do not stay put, but grow in every direction if given the opportunity, and something to support them (the ground, a tree, a fence or building). Some of our favorite food plants are vines (tomatoes, grapes, squash, cucumbers, kiwi fruit, melons, beans, and peas). However vi
Read more