May 26, 2014
It is seldom spoken out loud, but Memorial Day is a violent holiday. It commemorates those members of the United States armed forces killed in the line of duty. We think first of soldiers on the battlefield, but should also remember those who die in training, in traffic accidents while on duty, and of injuries and illnesses contracted in their service.


We remember especially those who died, because there is no way to repay the service they gave. In answering the call to service, their lives came to an end, and no honors paid to their memory, no benefits paid to their families, can change that sad reality. In service to their country, they gave their lives. We are bound to give back this small measure of appreciation.

When we as a nation feel it necessary to put men and women in uniform and send them into places of danger, we are obliged to give them honor and respect. This is true regardless of how you feel about any particular military enterprise.

U.S. military cemeteries blanket the globe, each one a reminder of a time this country has put guns in its children's hands and sent them off to fight, to kill, and to die, from Mexico City, to Saipan, to Luxembourg, Tunisia, Italy, the Philippines.

As our military involvement in Afghanistan draws to a close, it is right to honor the service paid to our nation by our military, including the tragic cost seen in the casualties they suffered. War is always evil, and the best that anyone has ever claimed is that it is sometimes a necessary one. It has proven so easy to get into wars, and so difficult to get out of them. We have so many reasons to obscure the savage truth of war: grief, patriotism, guilt, fear, admiration for the virtues of those who serve. But in our memory, we had best not sweep any of those truths away as we remember those who have fallen.

Graves of 5th Division Marines, Iwo Jima. Bodies of U.S. Marines killed in the Battle of Tarawa lie in a trench grave, November 1943.
We give thanks for the lives of those who have served their country, and mourn at their loss. In faith, we remember, and keeping faith, may we never take their service for granted, or ask for their sacrifice without full awareness of its gravity. 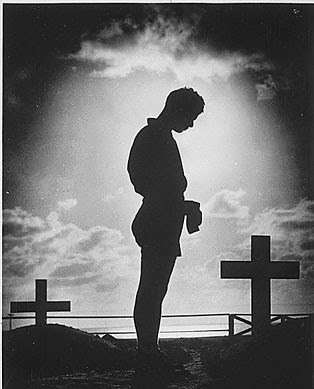