November 10, 2010
This is an odd holiday, commemorating a number of different things. Do we pick and choose? Do we try and hold them together? 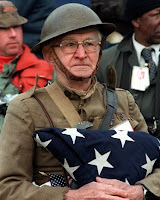 In the United States, November 11th is observed as Veterans Day. The service of all veterans of U.S. military service, living and dead, is lifted up as a civic honor. It was established in 1954 after a grassroots campaign to make it a day for “All Veterans.”

Previously the day had been observed as Armistice Day, commemorating the cessation of battle on the Western Front during the First World War. That day, the guns fell silent,

and the people at home rejoiced at the end of unimaginable destruction (16 million dead, 21 million wounded, both military and civilian).

Martin of Tours was a Roman soldier when, through a dream where Jesus recognized him, he became convinced in his Christian faith. He continued to serve in the 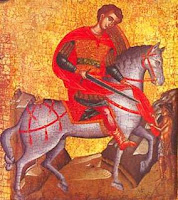 military, until he came to believe that his faith prevented him from fighting. Martin was jailed for cowardice, but offered to go into battle at the front of the army, but without arms. Eventually released from military service he lived as a hermit, founded a monastery, and was acclaimed bishop of the city of Tours. The patron saint of soldiers, he is also seen as a witness for peace in the way he put down his arms but not his courage.

Honoring veterans... celebrating the end of a destructive war... remembering one person’s holy struggle with faith and mission...

There are these tensions built into the day. One is the place where military veterans stand. Veterans know war to be both horrible and compelling. Veterans tend to support the military enterprise, yet none are more glad and relieved at the end of a war.

Veterans love the flag, yet know in real and personal terms some of the cost of that cloth.

However you choose to observe November 11th, please remember those who serve and have served in uniform. Please remember those, military and civilian, who have been sacrificed in war - in numbers too vast to comprehend and whose loss is too dear to calculate. And pay honor to the symbols that speak of the promise that people in every day seek to realize - freedom, justice, and peace.

Photos:
Military graves at Douamont, France (near Verdun) is by David Straker, 2006.