They Desire a Better Country

This passage begins with a discourse answering an implied question: “What is faith?” And we hear a well-known answer, often quoted when speaking of faith: it is “the assurance of things hoped for, the conviction of things not seen” (Heb 11:1, NRSV).

There is no mistaking the importance of faith in Christian community, and it’s good to know what we mean when we use this powerful word. Yet there are two key things to be careful of in reading this passage.

First, “faith” is often invoked as an antidote to reality, belief in spite of the evidence. But this passage does not quite say that. It only says that we trust in, we look towards, and we set our hearts upon things which we know, but which are not yet in view.

There are plenty of things which are invisible whose existence we do not doubt. While 7/8s of an iceberg is under water, we understand that what is unseen is still there. We do not see the wind, but when we feel it on our cheek or hear it blowing through the trees, we know it is real. We cannot see beyond the horizon, but we believe that if we keep walking, we’ll get to a new country. 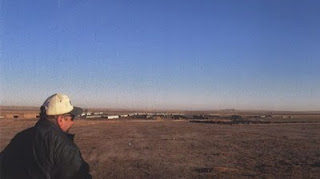 Faith is itself a mode of perception. Through “the eyes of faith,” we can see things not otherwise visible or clear.

It’s also important to understand the author of this letter is not asking an abstract question or debating a point of philosophy. His people need to know what faith is because they are being tested, not by God to see how faithful they are, but by persecutions, public abuse inflicted upon them, their families, and friends in the gospel (see the preceding chapter, especially Heb 10:32-33). Faith is not an object of academic interest – it is essential for survival.

Their persecutors aimed to make them submit, not to the faith-worthy and faithful God, but to the lesser gods of empire and culture in which these human outposts of good news were embedded.

It might have worked. But there is this little thing called faith...

Faith is linked not to evidence, but to hope. (Perhaps the Apostle Paul was thinking of something similar when he joined faith, hope, and love together in 1 Cor 13:13.) Faith looks ahead to things which are not yet in view, but which are real, are known, and are hoped for with urgency.

Perhaps a more recent example may help both our faith and our sight. Looking at Montgomery, Alabama in 1954, not many people could see that bus segregation would soon be ending. But Rosa Parks and a mighty host set out in faith, because they desired a better country, a heavenly one (Heb 11:16) – as seen in an integrated bus system.

In 1963 as Martin Luther King, Jr. stood on Lincoln’s steps and looked out over America, there wasn’t much proof that America would repent its sin of racial segregation. But his dream of an integrated and just America was not based on fact, but on faith. His faith in God’s transformative power was, to him and to many others, the assurance of the things they hoped for. He stepped forward in faith, because he and millions more desired a better country, a land well-watered by justice and righteousness. 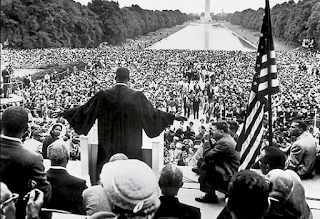 Today we’re telling faith stories of Parks and King much the way Hebrews recalls Abel and Abraham. And that old letter-writer knew that the hope of heaven was not separate from the hope for a transformed earth. The trials of today are connected to the promised land just across the horizon. We step forward in faith not because we’re sure everything will work out in the next few days – but because we put our hope in God’s beautiful dream for creation.

The same text, with additional resources, is available as a PDF file at the American Bible Society's Bible Resource Center.

Anonymous said…
Thanks. I especially appreciate your Thought: Faith is not linked to evidence, but to hope. - Bill Cook
August 5, 2010 at 2:41 PM

Nana said…
...and hope is linked to God's promises, both those already fulfilled and those we still wait to see fulfilled.