We notice anniversaries, sometimes in our flesh and bones, even when the calendar date is not consciously marked or observed. It still strikes me as a little jarring when September 11th (2009) is referenced simply as a date on the calendar, when ordinary meetings are scheduled, bars hold happy hours, and movies are premiered. I’m ok with that - it's natural and even good. I’m just noting it as my reaction.

Eight years of living means that much has happened since that morning when the sky was bright and clear, and an ordinary day became so deeply marked, profoundly affecting to so many.

Those four planes striking the World Trade Center, Pentagon, and a field in Pennsylvania, and those two collapsing towers, sent out ripples which are still being felt.

We have had eight years of wars, with costs far exceeding the heavy toll of 9/11/01. The cruelty perpetrated eight years ago has unfortunately been multiplied in military and civilian casualties, in expressions of ethnic prejudice, in torture.

Nearly three thousand families, plus unnumbered co-workers and friends, have had eight years without loved ones. New towers will be built. Those human losses are permanent.

The attacks continue to kill a small but real number of those who survived that day. Family members, survivors, and responders have taken their lives. The dust and debris has proved toxic to some of those exposed, and that number will only increase.

We have had eight years of recovery. As happens after every injury, the natural response of living organisms is to regroup, repair, recover, and renew. The losses hurt. The suffering has not ended, and for some the problems are just as acute today as they were in 2001. But time and time again, people have mourned and moved forward. People have reached out and helped one another. They have received the gift and done the work of forgiveness. They have shared their stories. People have offered hope and found inspiration. People have fought for understanding, for resources, for accountability, and have fought demons. Not every fight has been successful. But they have been holy, and the power of healing has won out so many times.

As a nation, we are still confused about how to achieve our need for security. While the towers have fallen, so much is still up in the air. It is literally eight years later, and it seems right to ask what have we done, what have we learned, where are we going. 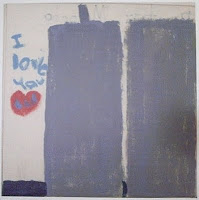 Recently I’ve been remembering and reflecting upon my 9/11-related experience. My 9/11 memories are so much based in the people I have met and related to around those events. But lately I’ve found myself remembering those buildings and the way much of my New York City life passed through them. Never my favorite parts of the NYC landscape, they have become hallowed in memory, and more so by the people that lived and died in them. And I am so grateful for every life that was saved from disaster that day.

I remain hopeful about what people can accomplish when working together on a common goal. I remain profoundly skeptical about whether we have the willingness to focus our attention on the problems that the attacks of 9/11 revealed. In national policy this means things like the security theater we go through in airports, bowing down before the gods of safety, removing and replacing our shoes and buying 3oz containers of shampoo as if those were meaningful steps towards airline safety. Little has been done to change the reality that terror can always find a target. And is seems that some of the important 9/11 responses serve to make more who are willing to seek destruction in the name of righteoousness.

A national day of service is a step in the right direction. But declaring each other heroes for helping paint an underfunded school is less than we are called to. The God who redeems life from the Pit asks more of us. I know we are capable of it. Eight years ago, hundreds of thousands of ordinary heroes showed up to do their part in response to an obvious atrocity. Can we do the same for the on-going atrocities of war, poverty, and oppression? We needn't raise a grand tower - we only need follow the more humble way of the ones who gave of themselves to help others.