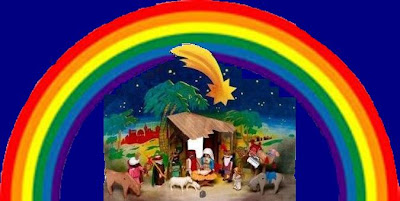 I heard on the radio this morning about comments made by Pope Benedict that gay, lesbian, and transgender identity and sexual behavior are threats to the survival of humanity.

Reuters, Deecember 22, 2008:
Pope Benedict said Monday that saving humanity from homosexual or transsexual behaviour was just as important as saving the rainforest from destruction. The Church "should also protect man from the destruction of himself. A sort of ecology of man is needed," the pontiff said in a holiday address to the Curia, the Vatican's central administration. International Herald Tribune

The Daily Telegraph:
Pope Benedict XVI has denounced gender theory, warning that it blurs the distinction between male and female and could thus lead to the "self-destruction" of the human race. Daily Telegraph

This comes on the heels of the announcement that Rev. Rick Warren will be giving the invocation at the innauguration of Barack Obama to be the 44th President of the United States of America. This selection has drawn criticism because of Pastor Warren's and his congregation's opposition to gay rights, and reported prohibition of membership to gay and lesbian people.

At Christmas, when the church celebrates the birth of its Lord, it is sad indeed to so grievously miss the point of the Incarnation. The Gospel of John said it in a way that has resonated for centuries, an ecology of humanity that has long been the Church's proclamation:

The Word became flesh and lived among us, and we have seen his glory... John 1:14

Not male flesh nor female flesh. Not Greek flesh nor Jewish flesh. Not slave flesh nor free flesh. Not black flesh, white flesh, red flesh, brown flesh. Not gay flesh nor straight flesh. To the evangelist, the one announcing good news, the important point was that God came in human flesh.

Quoting again from published reports:
The pope said humanity needed to "listen to the language of creation" to understand the intended roles of man and woman. He compared behavior beyond traditional heterosexual relations as "a destruction of God's work." He also defended the Church's right to "speak of human nature as man and woman, and ask that this order of creation be respected." International Herald Tribune

But we must clear on whose order the pope is seeking to have respected. Benedict and anyone else has a right to speak of human nature. But the right to speak is no guarantee of right speech.

Creation in the Bible and in Biblical history is a theological word spoken in response to the human experience of chaos and oppression. The God of Genesis 1 speaks, and order springs forth from a chaotic world. The Genesis 1 creation story itself is an antidote to the violent creation myths of Israel's captors.

The good-news text most Christiams will read on Christmas Eve or Christmas Day says something very similar. Yet God's order, which brings power and transforms relationships, is foreign to the order of a world disfigured by violence. In a world enmeshed in the darkness of sin, and in confusion about what the true God is up to, God's Word is hard to recognize.

He was in the world, and the world came into being through him; yet the world did not know him. He came to what was his own, and his own people did not accept him. But to all who received him, who believed in his name, he gave power to become children of God, who were born, not of blood or of the will of the flesh or of the will of man, but of God. John 1:10-13

Now, people on either side of the great gay debate will argue about God's plan for creation. But God has always been in the liberation business. And with God taking on human flesh, that means taking all human life as holy.

Any "order of creation" which leads to the subjugation and oppression of people as made by God is UN-holy, and is not God's order, but a fallen one.

It is an ancient rule of the the church that worship, praise, and prayer is the crucible of doctrine, not the other way around. There is a simple African hymn often sung at this time of year:

There are many verses, as the word love is replaced by others: life, joy, peace, and more. But I have never heard anyone sing that God came down that we may have order. The Christmas story, the Jesus story, the resurrection story in fact deconstructs the order humanity has made which is contrary to God's order of justice and harmony.

May God grant each of us a peaceful Christmas.

Pastor Joelle said…
What he said.

I don't know exactly how to put word to this, but I just find it odd how recently some want to wrap up so much of our theology in men and women having sex. Particularly weird for the Pope,who is celibate.

I'm still "fleshing" this out but I think somewhere in the church's history it's infantuation with celibacy, besides it's aversion to sex (that now it loves so much)...
had something to do with the women and men being free of the stereotypes and constrants that our sexuality puts on us. I don't know if this makes any sense. If I was in grad school, I'd make this my thesis.