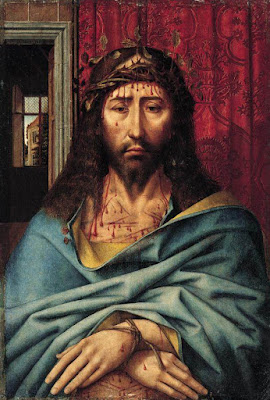 "Who will contend with me? Let us stand up together. Who are my adversaries? Let them confront me" Isaiah 50:8.

It sounds like an ill-advised taunt. The adversaries are actually close by. They are visible and powerful.

For Jesus, the adversaries were the ones in charge of the current world order, the Powers That Be. The Empire, from Caesar, through the foot soldiers of the Roman legions, to the tax collectors. The local authorities, from Herod, through the Temple hierarchy, to the pious, who enforced religious rules without regard to God's justice-loving priorities. And the "ordinary folk." The friends who betray. The doubters, naysayers, and gossipers. The ones who speak right, but do wrong. Or the many who watch, yet do nothing at all.

Those were the adversaries Jesus faced. But the Powers That Be are still with us. They exist in every time and every land. You can name the ones you see today. They are the systems, and the people in them, who are in the grasp of sin, and who act contrary to the God-inspired vision of life and faithful, everlasting love.

When Jesus made his entry into Jerusalem, he went to the Temple and overturned the tables of the money changers. They sat at the intersection of Temple and Empire, where systems of power met, fueled by money. Messiahs were understood as threats, forces of chaos to the existing order. When Jesus made his assault on the money changers, he was unmistakably an enemy to those in power. He must have known this was a suicide mission, running headlong into the Temple stones and onto the Roman sword.

He wasn't even the Messiah people wanted. Many wanted the tables turned, all right, so they could be on top.

"I gave my back* to those who struck me, and my cheeks to those who pulled out the beard; I did not hide my face from insult and spitting" (Isaiah 50:6). This is in the grip of the Adversaries. "Pulling out the beard" is a grave insult, a facial castration to humiliate a man by making him like a woman, just as rape is used for dominance and degradation. Humiliation is the goal, to make him an object of scorn, to gain submission from the victim if possible, but from all who witness this treatment.

The coming days of this Passion story work out very badly for this new king, as for most would-be messiahs. Seized, whipped, judged, stripped naked and tortured to death on a lonely hill outside the holy city. Abandoned by almost all his frightened friends, his dream of a new community dying with him. Abandoned even by his heavenly Father - forsaken.

Yet let the prophet have the last word for this day. "The Lord God has given me the tongue of a teacher, that I may know how to sustain the weary with a word.... The Lord God helps me; therefore I have not been disgraced.... I know that I shall not be put to shame; he who vindicates me is near."

Credits:
Colijn de Coter. Christ as the Man of Sorrows, oil on oak panel, circa 1500. This is a faithful photographic reproduction of a two-dimensional, public domain work of art. This work is in the public domain in its country of origin and other countries and areas where the copyright term is the author's life plus 100 years or less.

* "I gave my back to those who struck me" can be read as showing disregard for the attacker by turning one's back, but can also be understood as an allusion to rape of the defeated.