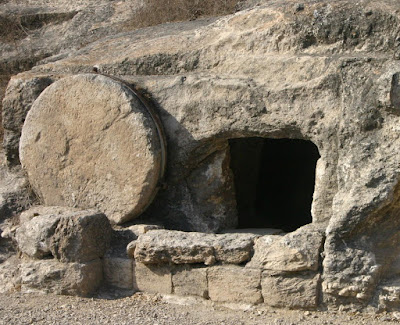 On the first day of the week, at early dawn, [who had come with Jesus from Galilee] came to the tomb, taking the spices that they had prepared. They found the stone rolled away from the tomb, but when they went in, they did not find the body. Luke 24:1-2*

It is remarkable that the Church makes so much out of nothing.

You know, the women who loved Jesus, went to the tomb that morning with nothing but some burial spices to wrap his body, so it would stink less and rot slower.

They had nothing. Their teacher, their friend, their good shepherd was dead. All they could do was go through the motions, do what custom required, honor his meaning in the life, and hope they could get past this, somehow move on.

And then, even his body was gone. Any empty tomb. Nothing there. Nothing to see. Nothing left.

Same as always. God has always been making something out of nothing.

Order out of chaos (Genesis 1). Life out of dust (Genesis 2). A people of promise out of wandering strangers. Freedom out of captivity (Exodus and just about everywhere). A feast, out of some scraps of bread and a couple of fish. A way out of no way. New life and a new people and a new hope for the world - out of murder and injustice. Saints out of sinners. Whole people from broken ones.

Who can imagine what God can do with what we see as nothing?

Credits:
Uncredited, Empty tomb. Used under (CC BY 4.0).
* New Revised Standard Version Bible (NRSV), copyright © 1989 the Division of Christian Education of the National Council of the Churches of Christ in the United States of America. Used by permission. All rights reserved.