To us who are being saved

Have you ever had a radical realignment, a perceptual shift where everything changes?

We've stopped talking about the conversion of Paul because of the way "conversion" suggests a change of religion. According to Paul himself, he never ceased to be a Jew, and at the time, there was no "Christianity" to convert to.

But it is clear that something happened to turn him around. We don't know much about where or how it happened - but we can see his movement. Saul the persecutor took on the role of persecuted. His encounter with God led this Pharisee to embrace the illegal (un-kosher) and un-holy, and accept the "pollution," the shame, the outcast status, and the physical suffering that came with this change.

In his letters, Paul repeatedly talks about the radical, earthshaking, transformative nature of the change. Here he stresses the perverse revelation of God, whose coming is seen not in immense power, but in weakness, whose wisdom looks like complete foolishness.

Have you ever seen those so-called "optical illusions," which can be seen in more than one way? Like the picture to the right, most people first see the picture one way. It requires some looking, some work, some change, for your eye and brain working together to notice the picture may be perceived quited differently. Is it a chalice, or two faces?

It seems to me that the Apostle is now seeing the world differently than he did before. Nothing much changes in the world when God's revelation comes. Jesus was not the first nor the last child of God to be nailed to a cross, not by a long shot.

But for those who are being saved, the world, seen through Jesus Christ and God's scandalous righteousness, is turned upside down.

One suspects that God's revelation to Paul was not a dramatic, one-time event, even given Paul's own description of his vision of heaven and Acts' story of his Damascus journey. Once that first shift occurs (when you now see the chalice, or the faces, when you realize that no continent has any better claim for being "on top" of the world), your location changes. You cannot go back to seeing just the chalice.

This is not something that happened once to a long-dead apostle. Paul describes God's process of on-going revelation and on-going transformation of the world.

The repressive regimes represented by the Iron Curtain seemed too strong to topple. But in the 1980s small cracks appeared - in Poland, in Czechoslovakia, in Hungary, in the Soviet Union. And at a certain point, people looked around and said "The emperor has no clothes. It's possible. It's time." Most of this change took place without violence, as millions of people saw at more or less the same time that what was solid was now shifting. 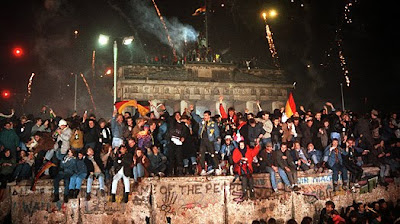 And so today. As people throughout the world look at their governments and institutions and see the always fragile nature of authoritarian power, we pray that people reach firmly and peacefully for freedom, in Tunisia, in Egypt, and elsewhere. We know that God's call to justice and righteousness is too often resisted with spilled blood. Yet we are awed at the witness of those praying and demonstrating in the face of police and military opposition, and still more at places where demonstrators and police have stopped their confrontation to share water and prayer. 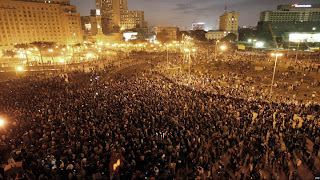 Paul knew that once you experience a new vision of what God is doing in the world, of what is now possible, while nothing is different, everything is changed.

But it is critically important to him that the change be directed by God. The moment of revelation is not "game over," but "game on." The new perception, the new reality, calls us to take responsibility for where we are going and what we are doing not just with our own lives, but with the world around us.

Paul is encouraging his listeners to recognize, to remember, to realize what God is doing with them. He knows how easily we are misled by our own desires. Our best desires - for God, for our ideals - may be even more susceptible to error. Our wisdom is likely to be foolishness, and our delusions of power are not solid.

This is why Paul, while he may not be able to change his "stripes," his Jewishness, his personality, his zealousness, he can change his location, his orientation. "God chose what is low and despised in the world, things that are not, to reduce to nothing things that are," so that we may receive God's righteousness and sanctification and redemption. This can't come from Rome, or Jerusalem, or Cairo, or Washington - only from God. And until we turn God-wards, we will be looking for salvation in all the wrong places.

The great good news is that "the message of the cross is foolishness to those who are perishing, but to us who are being saved it is the power of God" (1:18). We have the benefit of almost two thousand years of trying to get our minds around this notion - and it is still foreign.