On New Years Day, a bomb, possibly from a suicide attacker, exploded in front of a Coptic Christian church as a crowd of worshippers emerged from a New Years Mass. At least 21 people were killed and nearly 80 wounded. The attack came in the wake of threats by al-Qaida militants in Iraq to attack Egypt’s Christians (Al Hayat wa Dounia newspaper).

Eternal rest, grant unto them, O Lord,
and let perpetual light shine upon them.
May they rest in peace.

And then - a Christmas miracle.

Last night, thousands of Egyptian Muslims showed up at Coptic Christmas eve services offering their bodies as "human shields," making a pledge to collectively fight the threat of Islamic militants and towards an Egypt free from sectarian strife (Ahram online). 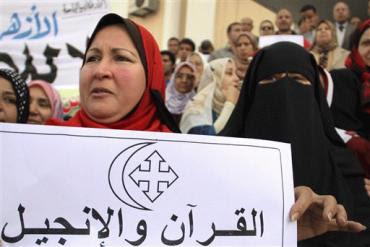 Egyptian Muslim women displaying cross and crescent
together in support of their Coptic neighbors
May God, who is one, who is all-knowing, who is all-merciful, who is peace, guide and support and sustain and protect the people of Egypt in their desire for brotherhood and peace. Restrain the hands of any who contemplate violence, and bless the land with the courage and hope of all who live for peace, for the sake of all your people. Amen.

We are inspired and blessed by the faithful witness of Egyptians to stand together against violence and for one another. May God bless the Coptic church and Egyptian Muslims. You give the world hope.