Which Lincoln to remember?

Each February, historians are polled for their rankings of the best (and worst) Presidents. However you choose to rate their performance in office and place in history, Abraham Lincoln surely stands alone like none other, excepting that singular first President, George Washington.

While other Presidents steered the ship of state in times of war, none did so when the nation was at war with itself, citizen killing citizen at a rate of at least 180,000+ Americans per year over the four years of warfare.[1] While 16 times Presidents were elected with less than a majority of the popular vote, Lincoln had the second lowest vote percentage ever, and the lowest ever to win election by the electoral college.[2] While other Presidents were opposed and hated, no other's election triggered armed rebellion. Lincoln, and the events he presided over, led to the first Presidential assassination. And Lincoln was the only President bold enough to risk - and win - freeing America's slaves.

There is no easy or complete picture of Lincoln. He freed the slaves - but as a desperate measure when he concluded the Union could not be saved by maintaining them in bondage. He at times welcomed Negroes to the White House and consulted them - yet evidenced many of the racist prejudices of his time.

He held the Union together - yet it took his armies four years despite immense advantages in numbers of soldiers, arms, communications, transportation, money, and every resource imaginable except military leadership. He fought to preserve the Union, yet by any measure stretched the laws and Constitution under the "exigency" of rebellion. Personally kind, he authorized many executions, including the largest mass execution in U.S. history.[3]

Which Lincoln do we remember?

This year it makes sense to remember the Lincoln, tougher than the rails he split, unaccountably wise in tolerating political stress, personally grieved, yet persisting in his belief that our democracy, even broken, was worth the price so many paid to try to put it back together.

The pictures above show Lincoln in 1860 before he assumed the Presidency, and five years later days before his murder. The Presidency takes its toll on all who occupy that office and the awesome responsibilities it carries. But probably none more than "Honest Abe." While the Confederate rebels sought to destroy the Union from without, his rivals did almost everything to rend the Union from within. Yet he persisted, in suffering, in humor, in canny maneuvering, in persuasion, and yes, in grace.

After Lincoln was given over to the ages, lesser ones struggled with, and ultimately failed much of his legacy. Yet we justly marvel that such a one rose up at such a time.

When Presidential leadership seems a distant memory, we should look again to that man from the prairie, whose vision saw beyond the struggle of his day.

"With malice toward none, with charity for all, with firmness in the right as God gives us to see the right, let us strive on to finish the work we are in, to bind up the nation's wounds, to care for him who shall have borne the battle and for his widow and his orphan, to do all which may achieve and cherish a just and lasting peace among ourselves and with all nations."[4]

Just because a person dies, their ideas and example need not. Just because those at the top are degraded and corrupt, does not mean that aspiration and inspiration are not living forces among us. We remember the complex Lincoln, who emerged from the most hopeless decades of American political life. I also look forward to the next President, who by the grace of God may walk in Abraham's shoes, and lead us to a new birth of freedom we do not yet see. 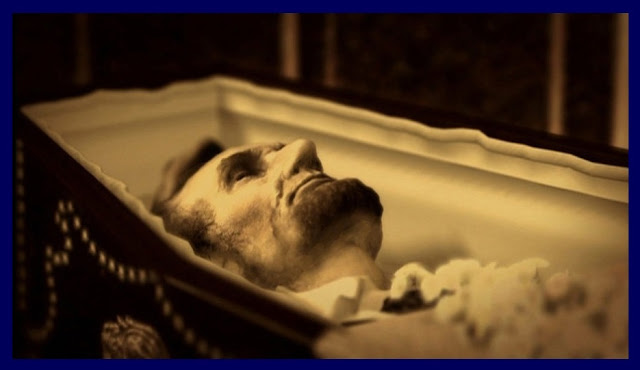 [1] Wikipedia: American Civil War. The total number of military deaths is credibly estimated from 618,000 to as high as 850,000, plus about 130,000 civilians, both free and slave.
[2] Wikipedia: U.S. Presidential popular vote. In 1824, in the first election when the popular vote totals were recorded, John Quincy Adams came in second of four candidates, but was elected by the House of representatives after no candidate received a majority of electoral votes.
[3] Lincoln ordered the execution by hanging of 38 Dakota Sioux. A complicated story, Lincoln approved 39 executions, but pardoned 264.
[4] A. Lincoln. Second Inaugural Address, March 4, 1865 (as the end of the fighting drew near, 42 days before his death).