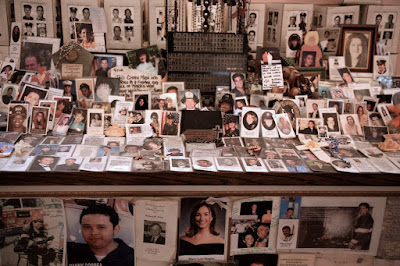 Seventeen years later, we are still in the business of remembering. And there is so much to remember.

The beautiful clear sky. The terror streaking out of the skies. The death and destruction, the anguished waiting. The bravery and compassion multiplied by thousands and millions as people strove to help their neighbors. And also the way the evil of a few escalated into seventeen years of war with no end in sight.

We remember the ones who died that day. The photo above (taken some years after 2001) shows an altar at St. Paul's Chapel, shining forth the faces of some of those beloved people. Their family and friends still know their loss personally. Like Danny Correa, the 25 year old man looking out from the lower left of the picture. "I dance in the clouds and soak in the haze," he emailed a friend, soon after he started working near the top of the North Tower. He was very happy to get that job, which allowed him to provide for his daughter, complete his bachelor's degree in accounting (with honors), and support participation in his basement rock band. When he was three years old, his father Helman brought him and the rest of his family from Columbia to make a better life in America. From the moment the first plane hit, Danny had no chance at the good, decent life which should have been ahead of him.

Each life is precious. When we see how quickly and often how unjustly life can end, we are called to remember what is most important.

If we remember anything besides the people, it should be the responsibilities which 9/11, Afghanistan, Iraq, Guantanamo, and all the other sites of the "global war on terror" evoke from us. The paired duties to enjoy the gift of life, and to build a world where others can do the same. 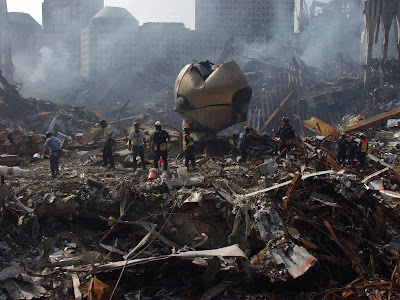