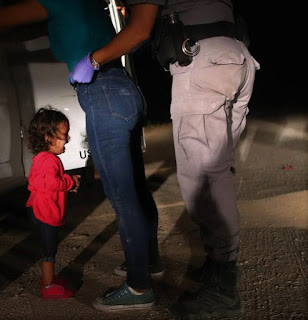 I apologize for this picture. It is disturbing to any ordinary human being. And I apologize for the fact that the girl is crying. And I am deeply sorry that she will be hurt still more by state-sponsored child abuse perpetrated by the United States of America. You can see the U.S. (that's us) right there on the door behind the frightened girl.

This American nation has never been a perfect beacon. We have done things far worse than this. Slavery and Jim Crow, the Native American Genocide, the Japanese internment, various unprovoked wars inflicted on other lands, killing hundreds of thousands and millions. In all of these cases, there was a complex interplay of motivations, greed and pride and fear. Always fear.

But this latest sick fantasy of Donald Trunp and Jefferson Beauregard Sessions strikes me as distinctly different. It is just plain cruel.

There is NO REASON to take these children from their parents. We should see this little girl in front of us every single day until this nation repents of the evil done in our name. She - and the world, and every decent human being - sees what is being done to her and her mother.

Many of these children, and their parents, are here legally seeking asylum. These separations are not required by law or anything else except perversity.

Our President and Attorney General love to talk about respect for the law - except when they are breaking it or lying about it. But when Sessions quotes the Bible to justify his racist cruelty, he sins before God and the nation. He forgets that "Love does no wrong to a neighbor; therefore, love is the fulfilling of the law" Romans 13:10.

We sin before God and the nation if we stand by. Love in modern day America must be a love which resists the temptation to cooperate with evil, which goes to the people and places which are suffering, to embrace them, to stand with them, to advocate and fight for them. And by so doing, enable our mutual deliverance.

God bless America with the courage to give our full measure of devotion, that this nation, under God, shall have a new birth of freedom.

THESE ARE FACTS - THIS IS OUR AMERICA

"An undocumented Honduran woman says that immigration officials took away her four-month-old as she was breastfeeding—and she was put in handcuffs when she tried to hold on to her baby. A group of parents says they were told their children were being taken away to be bathed—and as the hours ticked by, they realized they weren't coming back. And another set of moms claims they could hear their children screaming for them in another room, and were powerless to go to them." Parents Magazine

[A two-year-old Honduran girl stands with her mother after being detained by US Border Patrol agents near the US-Mexico border on June 12, 2018 in McAllen, Texas (John Moore/Getty Images/AFP, cropped). A new U.S. policy implemented by President Donald Trump and Attorney General Jefferson Beauregard Sessions will separate this girl from her mother, with no guarantee of timely reunification or even contact during their separate detentions.]