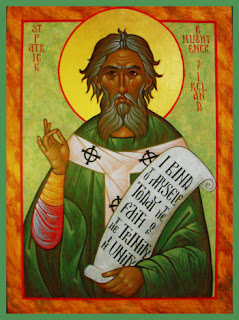 There is probably no way to tease apart the Patrick of history and that of legend. What is certain is that he, with Saint Bridget, was one of the key leaders of the church which established Christianity in Ireland.

One of the more compelling parts of his story is that he was a slave who escaped Ireland, and later returned to spread the gospel of Christ. Patrick's Confessio tells that his time in captivity was critical to his spiritual development and embrace of Christianity. He also tells that while a captive, he worked as a shepherd, prefiguring his later work as bishop. The legend is challenged, and he and his family may have been slave-owners and slaver-traders, something which was prevalent in Ireland at the time, and permitted and regulated by the Church. ("Was St. Patrick really a slave trader and tax collector?" by James O'Shea.) Whatever the truth, the tradition lifts up the hope of freedom.

What is not in dispute, is Patrick's emphasis on the Trinitarian faith of the Church: God in three undivided persons, Father, Son, and Holy Spirit. And the tradition has passed on prayers and hymns attributed to Patrick which boldly maintain the power of this interlocking Trinity. 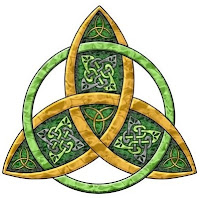 I bind unto myself today
The strong Name of the Trinity,
By invocation of the same,
The Three in One and One in Three.

But the Patrick tradition goes even further, seeing the life of God as all-encompassing, transcendent and imminent. He calls upon every attribute of God, every power, wrapped in the centrality of Christ, to protect and strengthen the believer in a turbulent world.