September 15, 2016
The pictures are not original to the email.

From: PBellanboy@aol.com
Date: Tue Sep 18, 2001 1:53 am
Reply To: ELCA-L@yahoogroups.com
Subject: Putting things back together

As you undoubtedly heard, the stock market opened today, and went down. Seems like we truly are getting back to "normal."

This evening commercial airliners have been flying overhead on their approach to LaGuardia. I know this is as expected, and a week ago it was no big deal. I know they're flying to LaGuardia. But the noise often impinges suddenly, and I start.* 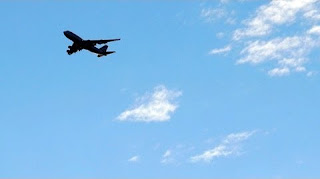 If you've subscribed to the WTC-Prayer list, you will have seen this news, but I was glad to reach a friend last night. Rev. Win Peacock is the Director of the John Heuss House, a homeless drop-in shelter in the Financial District. Their phones have been out, but I finally got him at home. Not only are all their staff and residents physically safe - they didn't close, didn't move. They provided emergency shelter to businesspeople fleeing the dust cloud, and had 50 homeless people from Tuesday to now. By coincidence(!), they had done repainting this summer and had a supply of masks on hand. They're worried, though, about some of their outreach clients who lived at the WTC, and about friends in the Project Renewal homeless outreach office which has been destroyed.

Lisa and I were also happy and amazed to hear about St. Paul's chapel, right next to the Trade Center on the northeast. It is exceptionally lovely, the oldest public building in continual use in NYC. George Washington worshipped there immediately after taking the oath of office as the first President of the U.S. One of the chapel's charms is the windows, small clear panes, many original, handmade, and now turned shades of purple due to many years of UV exposure. The churchyard is filled with rubble. The old trees have been toppled. But they protected the chapel.** Not one window was broken. 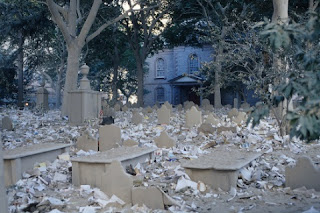 View of St. Paul's churchyard with WTC debris and Chapel in background.
http://flying-dutchgirl.com/blog/911-memorial-new-york-st-pauls-chapel

Throughout the coming weeks, as we move through the city, we will connect with people, see familiar faces. Some we recognize as part of our urban landscape, a fellow commuter we see every so often, somebody we worked with two jobs ago. Each time we see someone for the first time since September 11th, there will be a little jump in our hearts, and a (probably unspoken) "thank God." These days when someone says, "good to see you," it's not a formality.

Peace be with you.

* I don't hear much about this in the national memory, but starting Tuesday morning 9/11/01, virtually all commercial air travel stopped for several days. One of the more jarring things from that day were the fighter jets which came over NYC, heard but less often seen. It was hard not to jump, or cringe, or come alert with those noises overhead - normally background noise, that week something very up front.

** Only one tree actually fell, the tall London Plane Sycamore in the northwest corner of the churchyard.