This year, in advance of the anniversary, I've been remembering that day and the aftermath. There is so much. Those attacks re-shaped my life, and have had an immense malign impact upon the world. The killings of thousands that day helped loose the dogs of war which have killed many hundreds of thousands since then.

There is lots to remember about that day and the immediate aftermath. For some reason, this year, I find it easier to be in touch with the strong feelings: the shock, the fear, the confusing uncertainty, the horror, the immense sadness... and even the hope, that in the midst of terror, there would be a way out.

I remember the shriek of fighter jets over Manhattan that afternoon, roaring out of nowhere, and not being sure if this was threat or protection. I remember the helpless feeling of wanting to do something to heal, to help, to fight back against this assault on humanity and on my city. I remember the smells: the burning which went on for months, the sweat, and yes, the decay. I remember the hard-worn places of respite, where there could be calm, and rest, and restoration in the midst of devastation.

I remember how deeply affecting the stories of escape were - and are - and how breathtakingly thankful I am for every person that found deliverance from death. And how just as affecting are the stories of those lives brought to an end, and those who walked in grief. The stories of heroism are inspiring and tragic and too numerous to count - and so many of those stories never made it out of the towers.

I always come back, though, to the people. Many heroes, some clunkers, and a great number of ordinary good people. I got to know the dead through the witness of the living: the stories they told, the pictures and posters they shared, the mementos they brought. And I got to see how people and a city and a nation under grave stress responded. Not always well. But more often than not I was honored and humbled and impressed and grateful.

Those attacks continue to take their toll. The 9/11 dust continues to end lives early, and some people who survived the day of 9/11 have never bounced back. The geopolitical effects echo at least from Afghanistan to Iraq and Syria to Libya. Lord, have mercy.

Today I pay honor to the people of 9/11: those killed, those who tried to help, and the millions throughout the world whose hearts went out to those in distress. If the human race can do that consistently, hope is not blind faith, but the reasonable response. May it be so today. God bless the people of 9/11, and may God lead us to the healing of a world in continued crisis. 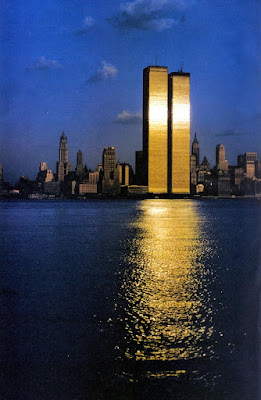 I lift up my eyes to the hills— from where will my help come?
My help comes from the Lord, who made heaven and earth.
Psalm 121:1-2

The towers could be spectacular as the setting sun turned them to bronze, copper, and gold. I have been unable to find the proper attribution for this beautiful picture. Thanks to the artist who saw this moment and shared it.

Unknown said…
wow its very beautiful city privileged by us

Institute of Management studies in Mumbai