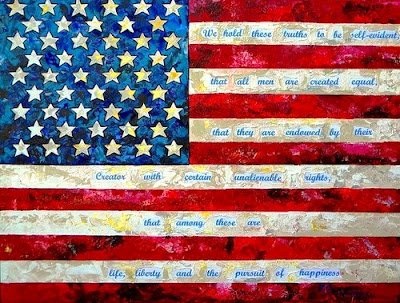 An Internet search for "Declaration of Independence" returned 4 advertising links before reaching Wikipedia and the National Archives. 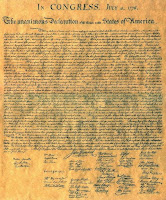 There's no doubt that one of the freedom's envisioned back in 1776 was the freedom to engage in commercial activity. But in commemorating July 4th as a pivotal date in the nation, let us remember those words, for the Declaration's truths were not self-evident then, nor are they now.

1. "The unanimous Declaration of the thirteen united States of America." It is remarkable today to think of any congress composed of our states as united and unanimous, especially on a matter of controversy. Certainly the national opinion was far from unanimous. Challenging one of earth's most powerful empires took courage, conviction, and those who put their names on the line were taking a great risk. Any union has tensions and potential divisions. The Continental Congress worked hard to get a united agreement, and the subsequent war was as much a story of maintaining the states' alliance as it was about the military action. The Declaration could not have worked unless the states were and stayed united - in union there is strength.

2. "When in the Course of human events, it becomes necessary for one people to dissolve the political bands which have connected them with another..." Think of the Declaration as the initial filing in a divorce proceeding. Skip over for a moment those great "self-evident" truths and you will find a detailed case against King George ("a history of repeated injuries"), the claims of how the colonies have been faithful and tried to make the relationship work ("In every stage of these Oppressions We have Petitioned for Redress in the most humble terms"), and the conclusion that these differences have become irreconcilable.

3. They knew the Declaration meant war. They accuse the King of waging war against the states, and declare instead that the States have "full Power to levy War." War, warfare, and the military are mentioned at least 13 times in this short document.

4. An imperfect union.
We now see the gap between "all men are created equal" and the reality of inequality built into the young nation. The pictures of the Continental Congress show white men only, with some women in the gallery. But the vision they put forth has had legs: equality before the law, a government constituted by and in service of its people. The Declaration of Independence started to enunciate the conditions that would allow the new nation to grow in wisdom. Those who came after could use these words in pursuit of greater equality, liberty, and happiness than could be reached in 1776. The Declaration challenges its heirs to a critical patriotism. As another patriot would say a century later: "My country, right or wrong; if right, to be kept right; and if wrong, to be set right" (Carl Schurz, Senator from Wisconsin and a German immigrant, 1872).

May the blessings of liberty be known in every age and in every land, and may we always keep our eyes on that prize.