September 30, 2012
One of the many heroes of 9/11, Stephen Siller was a NYC firefighter. He had finished the late shift at his Brooklyn firehouse and was on his way to play golf when he heard about the WTC attack. Returning to his firehouse and finding his company already dispatched, he grabbed his gear. When stopped at the Brooklyn Battery Tunnel, he donned his gear and ran through the tunnel to join his colleagues, and was killed in the collapse of the South Tower. 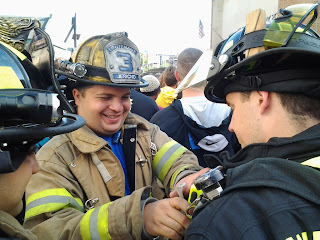 His family honors his memory through programs for first responders, military personnel, and children who have lost one or both parents, a special interest of Steven’s whose parents died early in his life. In the annual Tunnel to Towers run, people retrace his steps and remember the sacrifice Steven and so many others made. Many firefighters and military make the journey wearing full gear, like these firefighters from Jericho, Long Island. The Lieutenant is securing the emergency locator on one of his companions.

This year, I made that journey in honor of Joseph Lovero, a fire dispatcher with the Jersey City Fire Department who was assisting the NYFD when he was fatally injured in the collapse of the north tower. I did much more walking than running, but God willing and with a little work on my part, next year I will run.

Of course it is awesome to see 30,000 runners and walkers, plus volunteers and fans. But three moments stand out for me.

Even if you're inclined to run, traffic jams make it nearly impossible to run all the way. But the most impressive traffic jams were in the tunnel. Twice I passed volunteers who were waving traffic over to the left. As people approached the "road block," you could hear a rolling wave of continuous clapping. The first was a soldier moving even slower than I was, his wheelchair trailing behind, on two artificial legs, and taking occasional helps from an oxygen tank. The second was a Marine wearing a "Semper Fi" t-shirt, running on grit and his two new legs, with extra support from a pole strapped to his prosthetic right arm. Each had also obviously suffered other injuries seen scarring from burns and head wounds. Yet they ran, one slow step at a time. 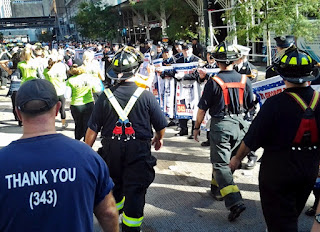 Coming out of the tunnel, the runners were greeted by a corridor of uniforms. On the left, a long row of American flags held by members of the service academies. On the right, New York City firefighters in their dress blues, each wearing a cloth banner with the picture and name of one of their fallen 9/11 colleagues. It takes a long time to run past 343 firefighters. A very long time.

Finally, it was amazing to be greeted at the finish line by friends, all the more the unexpected one. A Big Shout Out to Johnny Mott, and to the fabulous Tom Murphy.

So many people have led the way in faithfulness, to our nation, to our city, to their companions and to their neighbors. May this be a perpetual tradition.