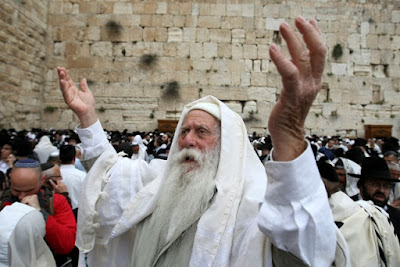 The Lord spoke to Moses, saying: Speak to Aaron and his sons, saying, Thus you shall bless the Israelites: You shall say to them, The Lord bless you and keep you; the Lord make his face to shine upon you, and be gracious to you; the Lord lift up his countenance upon you, and give you peace. So they shall put my name on the Israelites, and I will bless them (Numbers 6:22-27).

Every day for the past 3,000+ years, these words of blessing have been spoken to the people of Israel. This "priestly blessing," named as such because it was given to Aaron and his sons, the hereditary priesthood of Tabernacle and Temple, has echoed through the ages, in that lineage, and adopted by the presiding ministers of the Christian Church.*

The photo above is contemporary, taken yesterday. "A descendant of the priestly caste pronounces the High Priest Aharon's blessing at the Western Wall," 70,000 attend Priestly Blessing at Western Wall, Jerusalem World News, 12/31/11.

They are said so often, it may take some effort to hear them.

In their Biblical context, they come at the end of several chapters of instruction for organizing the priestly class, the Levites and the sons of Kohath. Even after the destruction of the Temple in Jerusalem, we see these kohanim still (in the surname Cohen). 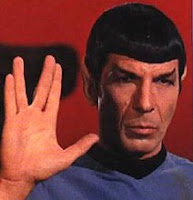 * The blessing has even made its way into popular culture. In the TV series Star Trek, Mr. Spock's Vulcan greeting of "Live long and prosper" might be seen as a simplified and secular version of the priestly blessing. Especially as the original actor in the role, Leonard Nimoy mirrored the gesture of the kohanim from his childhood synagogue.