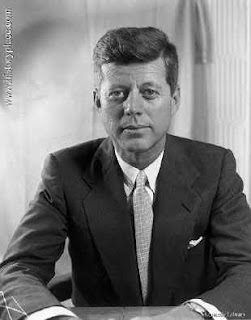 Today marks the 52nd anniversary of the killing of John F. Kennedy, President.

Since his death, we have learned some of the back story of his complicated life. Without the chance to complete his term as President - and a full life of public service - we are left with a story of promise and potential not fully realized. So it becomes easy to imagine a flawed Presidency, or an idealized one. And that has probably distracted attention from this American hero, who was elected based in large part on the strength of his character.

Our polis, our civic life has suffered from this traumatic loss. While not my favorite talking head, Chris Matthews' writing on Kennedy is worth reading, and his new book Jack Kennedy: Elusive Hero, provides a good look at a leader whose loss we justly mourn.