There is much commentary and preaching on Christ’s kingship – particularly the way his kingdom differs from that of earthly kings (see for example Philippians 2:5-11). Christ is kingly – but the armies he commands do not seek vengeance or inflict violence. Instead they sow mercy and kindness and proclaim God’s love. Christ’s kingdom is filled with riches – but those riches are not stockpiled gold in the treasury. They are the endlessly distributed productive activity of people and yeast and all of creation sharing life with one another.

This image from Colossians – that Christ “is the head of his body, which is the church” (1 Col 1:18, CEV) – is another metaphor. This passage contains exalted, extravagant, beyond kingly language: “He is the first-born Son, superior to all creation. Everything was created by him..." (1:5-16, CEV).

But let us take those metaphors of head and body seriously. Nowadays we give honor to the head, thinking that the brain is the seat of consciousness, sitting atop the body and commanding it. 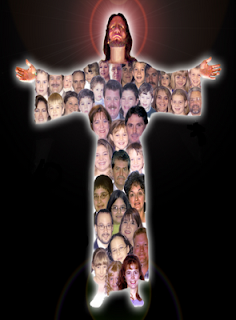 But the head does not create the body, and if we are honest, the head does not command nearly as much as we thinkers might like. The head does not end nor the body begin at the neck. The head and body are linked from the beginning, from the process of conception and development in the womb, to the way nervous system and blood supply and our marvelous chemical signals ensure that the whole body is linked together in an interdependent, continually communicating network where nutrients and messages are exchanged among all parts. And when that circulation, that interdependence stops – by illness, injury, or death – the body and its parts die.

As we hold this body metaphor together with that of Christ as king, we might think about the Roman and similar empires as diseases which inhibit the healthy functioning of humanity's body. We can see the signs of disease when humans are kept in debt, in poverty, in slavery, and hung on the world's many crosses.

We justly call Christ “King,” we honor and follow him not simply because of his exalted position at the head. But read further into the passage. Christ is at the head because he was first to be raised from death, and that death was sacrificial. And that sacrifice was not deadly, but reconciling and healing and life-giving for the whole body. It was the medicine that diagnosed (revealed) the condition of human evil and at the same time applied the antidote, seen in Christ's anti-kingship.

“God was pleased for him to make peace by sacrificing his blood on the cross, so that all beings in heaven and on earth would be brought back to God” (1:20, CEV).

Christ’s body does not end at the neck any more than his life ended at the tomb.

[This text is available with additional resources for Christ the King Sunday, as an American Bible Society EBulletin.]