On this day in 1517, Martin Luther attempted to open a public theological dialogue about reforming the practice of the church. One of the results was the Reformation, as social, political, and ideological conflicts divided the Western church. Different branches of the Protestant tradition emphasize different ideas about the Christian faith: the primacy of grace, the distinction between law and gospel, the sovereignty of God, the freedom of the Christian.

The readings for today touch on these themes, which the reformers would assert are not theirs alone, but true for all Christians. Perhaps the most enduring and most radical notion was the reformers’ return to the Bible, translating scripture into modern languages.

Reading and hearing the actual words of scripture... Of course, this has produced some bizarre, idiosyncratic interpretations. But this has also been eye-opening and liberating for uncounted millions, for the church, and for the whole people of God. For the Lord often says something more surprising, more subtle, more challenging, and more grace-ful than we expect.

Take Psalm 46, which was a starting point for Martin Luther’s most famous hymn. “God is our mighty fortress, always ready to help in times of trouble” (Psalm 46:1, CEV).

This kind of prayer is a staple of personal faith. So often we need protection from the things which bedevil us, from real enemies and forces which threaten our safety and wellbeing. Luther himself spent nine months hidden from his enemies at Wartburg Castle, in that time translating the New Testament into German.

Yet the psalm – and the whole of scripture in which it is set – takes us well beyond that very real desire for God’s protection. It is a declaration that our refuge goes far beyond that which we imagine.

We hope for security. But God’s strength is not found in fortifications – the walls of Jericho, Jerusalem, Babylon, and Berlin have all come tumbling down. It is not found in mighty empires – they all crumble, 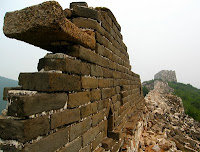 leaving behind the rubble of their fleeting glory. It is not found in the created order – for neither the earth nor the sea is secure. It is not found in wealth, nor family, nor even our religious institutions, despite our deep desires to find something in this world we can trust wholeheartedly. (The psalmist himself may well believe that the holy city of Zion is so closely tied to God that it is such a fortress... Luther himself placed an unfortunate trust in the fortress of the state, with dire results for the German people in his day and in later centuries...)

But the words are clear: “God is our mighty fortress...”

God is more than we dare suspect. More than creation: “At the voice of God the earth itself melts” (Psalm 46:6, CEV). More than empires: God “breaks the arrows, shatters the spears” (Psalm 46:9, CEV). And even when we dare to cling to God’s might, “The LORD All-Powerful is with us” (Psalm 46:11, CEV), we might ponder the nature of God’s power.

For we know that, much as we might wish it, the fortress God does not make us invulnerable. That is the desire of those who build castles and fortifications, which stand only for a moment. “A mighty fortress is our God,” sing the Psalmist and Brother Martin and all the faithful. If we wish to find refuge in God, let us cling not to that which is fleeting – but to God’s righteousness, God’s justice, God’s saving power, God’s loving faithfulness, and yes – though it may be unjustified and totally unexpected – to God’s mercy.