One of the central features of current controversy over the Park 51 Islamic community center is the public debate over what constitutes “holy ground.” This is held to be an essential part of understanding and remembering what happened on 9/11/01.

The debate is not a new one. New Yorkers and victims’ families have been contending over this since 9/11/01, even that day as the site was dubbed “Ground Zero,” a metaphor for the epicenter of total destruction and toxicity of a nuclear blast, recalling the U.S. attacks on Hiroshima and Nagasaki 56 years earlier, and perhaps alluding to the concentric waves of devastation from that center (buildings destroyed and damaged, lives mangled and griefs multiplied, and subsequent effects such as attack-caused illnesses, retaliatory actions, even healing).

Victims’ families, responders, and other interested parties picketed and contended – never fully successfully – for what ground would be officially hallowed. They presented maps and graphs showing where each piece of recovered human remains was found. This approach reflects the ancient understanding that “blood hallows” – or in other terms might provide a telling indicator for where victims’ lives should be memorialized.

Perhaps the best known fight was to preserve the footprints of the original WTC towers as “holy ground” for memorial space only. Because the WTC plan includes memorial pools, most people think this battle was won. In fact, the memorial pools and surrounding area are smaller than the tower footprints, and not the same ground as the original tower space. “Holy ground” at the World Trade Center site has never been a self-evident, fixed, or agreed-upon concept.

In these political, commercial, and emotional negotiations, the entire WTC site has never been regarded by most people to be off-limits to all activity other than memorialization. In recovery, construction, and post-development, the WTC has been and will be a place for all kinds of human activity – as it was before 9/11/01. It is a place where people work and eat. It has toilets and garbage baskets. I have no doubt that the site has and will see love and sex, arguments and peacemaking, drinking and cursing and joking, music, dancing, and prayer in many different traditions.

In the fervor to define the limits of where the “holiness line” is to be drawn, at least as it applies to Muslims, one of the more interesting proposals has come from Carl Paladino, one of the candidates 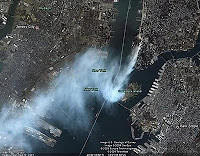 for the NY Republican gubernatorial nomination. He proposed that mosques should be excluded from the area covered by the dust cloud. (”I want a simple restriction over the Ground Zero site which is the footprint and includes the dust cloud that includes the remains of all those people who died”.) While he seemed to me to be grasping at straws to find a rational basis for drawing his line, this idea again hearkens back to the notion that “blood hallows,” or that the place where human remains are laid to rest is particularly sacred.

While not accepting Mr. Paladino's premise that the Islamic faith or the prayer of Muslims profanes the memory of 9/11, his more expansive notion of “holy ground” is a way to touch some of the realities of 9/11. Like the firefighters who sifted through the dirt looking for their lost ones, like the family members wishing to retrieve debris from the Fresh Kills landfill because some specks of dust were missed, we have this sense that the lives lost that day were precious. Seeking to hallow every fragment speaks to the true depth of loss.

But we cannot gather up the dust to remake - even in memory - those who were killed. Some of their atoms are burned and scattered to the winds. Some we breathed in over those next few days and months, to become part of us. Some have been absorbed into the surrounding landscape. And some have traveled the world on jetstream and ocean currents.

The dead are dead. Their resurrection is in hands other than ours. And we can change neither of these realities.

So how can we claim holy ground out of what has been ground to bits?

We must be clear that the reasons the murderers gave for their crimes are not the outrage of 9/11. Neither their cited religious faith nor their claims of secular-Western-American evils were the abomination of that day.

Murder is the abomination of 9/11. The murder of people in downtown New York, in suburban Virginia, and in rural Pennsylvania is an abomination. The spilling of innocent blood is what evoked our outrage nine years ago when it happened close to home. But the spilling of innocent blood did not start or end on 9/11/01. We should regard all the world’s killing fields - the blood-soaked asphalt of poor neighborhoods, Iraq and Afghanistan, Cambodia and Congo, Israel and Palestine, Armenia and Eastern Europe - as kin to 9/11.

It dishonors the memory and profanes the ground of those who lived and died at the World Trade Center to make it a site of hatred rather than of healing.

Let us hallow the World Trade Center - once a killing ground - by making it a ground zero for peace. As the site is rebuilt, let it be a foundation stone for bridges between people, especially between the fearful and hopeful of every clan. Let it be, as it was on 9/11/01 and in the days which followed, even to the present day, a site where mercy and compassion reign in sad and holy triumph even amidst the ashes of destruction. 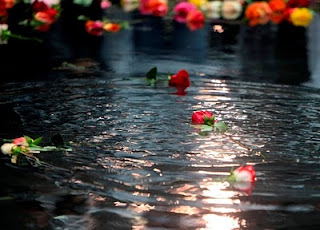 Gracious and loving God, whose name is peace and whose being is holy: sanctify our grief; heal our wounds; and redeem our loss. Lead us through our struggle, that we may not give in to evil, but may be renewed by your goodness, walking in your mercy and blessing your world, in the name of all those you loved, and whose lives are holy to you. We remember all victims of violence, and pray that we may be led out of the shadow of death through the light of your redeeming love. Amen.

Roses thrown by mourners float in a reflecting pool at the World Trade Center site in New York during a ceremony to commemorate the eighth anniversary of the Sept 11 terrorist attacks Friday, Sept. 11, 2009. AP / Chang W. Lee