Judges 19 finally makes it to the Super Bowl

Amazingly enough, this year there has been active commentary on the way Super Bowl ads portray women and male-female relations.

One of the ads from Bridgestone Tire has not been mentioned in this context, yet it provides a Biblical-themed assault on women.

In the ad, a car approaches a road blocked by a gang of men with a post-apocalyptic look. "Your Bridgestone tires or your life," the gang leader threatens. A scantily-dressed woman is pushed out of the car, which then turns tail and speeds away. The gang leader cries out "I said your life, not your wife!" The woman is left alone to confront the gang, disappointed that their prized plunder is lost, and only "the wife" is left behind. 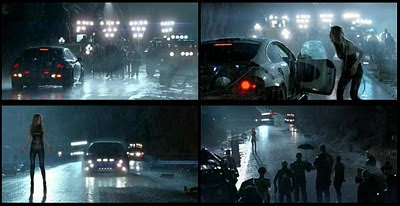 (Click on picture for larger image)
The ad is disgustingly reminiscent of one of the Biblical texts of terror, Judges 19. In this story, a Levite pushes his wife (or concubine) out the door, giving her over to a mob so that they will rape her instead of him.

Now the Bridgestone ad goes to some pains to paint the mob as harmless and inoffensive. This satirized mob would never gang rape a young, sexily dressed woman abandoned on a deserted road in the middle of the night, oh no.

But of all the violent, degrading, and just plain F-ed up gender depictions at yesterday's Super Bowl, this is Super-awful, and makes one wonder what they were thinking. How could anyone think this represents humor or a positive image of their product? (That tires would be valued more than a wife?) But if you read the Judges 19 story, and the use to which the Levite eventually put "his" woman, you may see an unfortunate continuity.

If you follow the link to the video, you can give it a THUMBS DOWN rating.