With the intimate associations of Christmas to home and family, comfort and security, Christmas Eve is not always seen as an evangelical opportunity. And this may not be the best time to pressure people into making a personal commitment for Christ.

One story blares on Caesar’s Network News. This story shows the Emperor literally ruling over the world. Images of Caesar and Roman gods fill every city, proclaiming “Caesar is Lord.” This story reinforces the message that you had best submit, in order to enjoy the blessings of Roman-imposed peace. Significance and value are defined by how you fit into the Imperial story. In this story, Joseph and Mary were a flyspeck among countless conquered peoples, their role simply to pay tribute and glorify Rome.

Yet there is this little bitty baby...

If it were up to Caesar, you would never hear his story. Nothing in it is exalted. The poor travelers have no family, connections, or money to give them a place. They carry only a swollen belly of questionable paternity. The newborn’s cradle is gilded with leftover hay and livestock spittle. The witnesses to this glory are the least reputable characters around, shepherds who, filled with angel visions, abandon their flocks.

Yet in the starlight of those Palestinian hills and in the candlelight of a midnight Mass, we can glimpse a new reality:

The angel said “I am bringing you good news of great joy for all the people.” Not just the few at the top, not just the ones who deserve it. And the angels rejoiced, not at the mightiest humanity had to offer, but at the meekest.

And bless those shepherds. They believed that angelic story, at least enough to go and see. And their fear turned to awe, and they shared this amazing good news. God sought them out, not as bit players in God’s imperial nativity, but that God’s story might become their story. 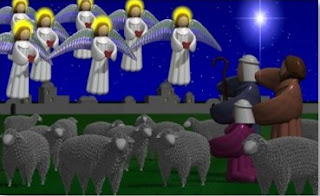 May Christ’s redeeming love be your story, this night and forevermore.

This text can also be found, with additional material, at the American Bible Society's Bible Resource Center, with this article in PDF.

Brad Evans said…
How about not believing in either?
Nowhere does it say that the Romans held a census; it's a stupid thing for an empire to do.
I have absolutely no evidence for the birth of this person. Christmas is a stupid story which costs far too much and takes too much time and trouble.
The idea of Jesus as babe in the manger is about as stupid as the idea of Jesus as Che Guevara 1900 years before Che was born.
The fastest growing segment of US religious life is "none of the above"; barely 2.2% of Americans aged 25 and under belong to Maineline protestant churches.