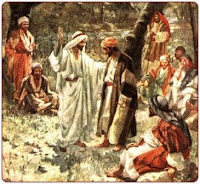 Of course, Jesus' question is not about his identity - who he really is - but how people see him and relate to him. Our answer, of necessity, says more about our self than it can say about Jesus.

It seems significant to me that this question comes at a particular place in Mark's gospel. It is the setup for the Transfiguration story, where Jesus' God-given identity will be revealed, shrouded, and misunderstood. But it also comes at a particular place. For the first time in Mark, Jesus is in Roman territory. It is when he approaches the Roman city of Caesarea Philippi that he asks the question. Identity politics were not invented in our generation.

Jesus' identity - or how he is seen - has a particular meaning in relation to the empire. The rest of the gospel turns on this point. Is he the Son of God (divi filius, the same appellation used of Emperor Augustus)? Or is he a rebellious slave who must be crushed and obliterated, lest he infect others with his heresy?

We cannot help but get the answer wrong, as did Jesus' disciples before him. The only one with both a clue and the courage to speak up is Peter - and then a moment later he is telling Jesus not to pull this suffering servant crap. Perhaps he is concerned not simply for the success of their mission and his place in it, but for the safety of his friend and teacher. He knows this kind of talk can get you killed.

The appointed Old Testament lesson for today says something more intelligible about Jesus than we are likely to, even with a lot of practice.

The Lord God has given me the tongue of a teacher, that I may know how to sustain the weary with a word. Morning by morning he wakens - wakens my ear to listen as those who are taught. The Lord God has opened my ear, and I was not rebellious, I did not turn backward. I gave my back to those who struck me, and my cheeks to those who pulled out the beard; I did not hide my face from insult and spitting. The Lord God helps me; therefore I have not been disgraced; therefore I have set my face like flint, and I know that I shall not be put to shame; he who vindicates me is near. Who will contend with me? Let us stand up together. Who are my adversaries? Let them confront me. It is the Lord God who helps me; who will declare me guilty? All of them will wear out like a garment; the moth will eat them up. Isaiah 50:4-9

Who do you say that I am? You are the one who sustains the weary with a word/Word. You are the one who, like a flint, has been sharpened by the blows that struck you. And you are the one who listens to, who is supported by, and who is willing to stand with the Lord God - even in the face of an empire which respects neither God nor humans, only power.

The gospel reading is unfortunately truncated. I'd really suggest going on and reading one more verse into chapter 9, right through that awkward chapter division. "And Jesus said to them, 'Truly I tell you, there are some standing here who will not taste death until they see that the kingdom of God has come with power'" Mark 9:1.

Jesus knows that we have trouble recognizing God's kingdom and the kind of power it expresses. We have been seeing kings and kingdoms in an entirely different light. Not the divine light of righteousness, of heaven breaking through, but we have been deceived in seeing power in the glow of gold and the glint of steel, the luster of purple robes and the deep red of spilled blood. Jesus is pointing the way to our transformation, that in his ministry we will see God's kingdom revealed. 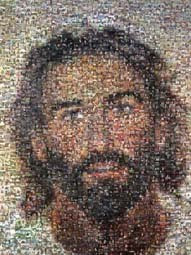 I love this picture... Jesus has a power that Caesar cannot even dream of. If you want a glimpse of that power, click on this link to visit the site which produced this portrait of Jesus. If you zoom in, you will find it is composed of 2019 photos of ordinary people doing ordinary things.

We're in position to answer Jesus' question when we know what God is doing for us. Caesar depends on keeping people off-balance, so they can be pushed, coerced, seduced, threatened, and rewarded into dancing the empire's tune. Caesar cannot stand except on the backs of the conquered, those who have bowed down, who have become obedient to Caesar. Caesar cares not if they submit willingly or by force, only that they submit. By contrast, God's kingdom depends only on God standing with us, in the hard places and the very ordinary ones. Who do you say that I am? "It is the Lord God who helps me..."