June 26, 2009
There are all kinds of things which make a celebrity. In the face of the on-going press of urgent competition for the world's attention, I would like to briefly recall someone from whom the media gaze will soon pass. 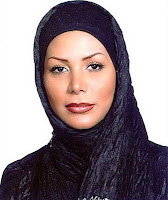 Neda Agha Soltan has become a symbol of the violent suppression of dissent in Iran. Neda's name means "the voice" or "the call" in Farsi. She studied philosophy, took underground singing lessons, and was engaged to be married. On June 20, 2009 ahe was shot and killed, apparently by government security forces, during a Tehran protest against the Iranian election results.

The graphic video of her death (Neda Agha Soltan, killed 20.06.2009) has helped make her death a focal image for seeing the conflict in Iran (perhaps similar to images from the U.S. killings at Kent State in 1970). Her bloody image has been used in protests, and pictures of her have been used in memorial gatherings. And the killing of a peaceful demonstator, when seen in this way, can be revelatory.

The regime understands this. Iran bans prayers for "Angel of Freedom," runs the headline. Iranian authorities have sent out a circular to mosques banning collective prayers for the woman. One of Neda's relatives said the givernment ordered her family to bury her immediately and barred them from holding a memorial service.

Prayer is dangerous, because prayer calls evil and suffering and hope to God's attention, and prayer is a mobilizing tool for God's people.

When demonstrating on the street is too dangerous, the rooftops cry out in the night.


The woman in this video is saying that they can take our phones, our internet, all our communication away, but we are showing that by saying "allaho akbar" we can find each other. She ends it [by] saying that tonight they are crying out to God for help.

Satan fears prayer, as do the powers of this world. In a fallen world, prayer is a revolutionary act. It was so when Abel's blood cried out from the ground (Genesis 4:10). It was so when the Hebrew slaves (Exodus 2:23-25). It was when Jesus cried out in anguish from the cross (Mark 15:34), and when he asked God to forgive his murderers (Luke 23:34). And it is so today.

Photo of Neda Agha Soltan's grave, said to have
been taken by her boyfriend. Caspian Makan AP