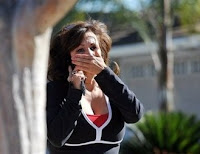 The images collide in a disturbing way. Santa Claus with a gun? The Christmas Eve killings in Covina, California, are shocking in so many ways. The numbers alone, ten dead and two wounded. A peaceful home invaded, a holiday celebration turned to mayhem. And Santa Claus, that icon of good cheer, and generosity, possessed by vengeance and dealing death.

Yet those are not the only colliding images. On the one hand, the prophet Isaiah foresees his nation’s restoration, where only extravagant poetry will begin to evoke the joy of this hoped-for deliverance. The nation and its people are envisioned as a bride and bridegroom, dressed in their finest, with garlands and jewels, the best possible for the best possible occasion. And the long-sought vindication, for which the people burned, is described as a burning torch.

Perhaps it is more shocking because we know people like these, we recognize the house they live in. The killer was a church usher who had recently lost his job. The dreams of bride and bridegroom had turned to ash, as he and his wife were near the end of a costly and bitter divorce. It is yet another domestic violence murder, in a year where this ugly reality has been much in the news.

Not only is it simply the images that are jarring, the killer becoming an anti-bridegroom, the torch of hope becoming a homemade blowtorch of destruction. But that what the prophet seeks – holy vindication burning like a torch – is uncomfortably close to what the killer seemed to be after.

Immediately after hearing these words of weddings and torches, we will proceed to voice a hymn of over-the-top praise to the Lord God, with all creation called to sing along: “Hallelujah! Praise the LORD from the heavens; praise God in the heights. Praise the LORD, all you angels; sing praise, all you hosts of heaven” (Psalm 148:1-2).

Sometimes it is the words of scripture which are jarring. It may seem hypocritical to sing praise to the Lord when around us we see so much still in need of redemption. Israel’s holy writings give ample testimony to the gap between the Lord’s goodness and deliverance, and the wrecked reality we too often inhabit.

The amount of lament in scripture might well suggest to us that many times lament and protest is the proper offering. While we may hymn the Lord’s goodness, we should never forget the brokenness of the world which the Lord seeks to transform.

Perhaps an image from the gospel is an appropriate balancing point. The old ones, Simeon and Anna, have seen much. By virtue of their age we know they have seen their nation conquered by Rome. It takes no imagination at all to know they have seen loved ones die, the text tells us so explicitly for Anna.

Yet they are not so old and worn that they have lost sight of the great hope they have in God’s promise. We find them in the house of the Lord, just as we find some of our old ones. They keep coming not because the religious institution is perfect, but because they still hunger for the touch of God and for the promise of redemption.

When they see a sign – and sometimes all it takes is a tiny thing, like a little bitty baby – they touch that hope, praise God, and begin to speak about the redemption that God has promised, that God has delivered, and that God is still working to bring forth.

For God’s people, praise is not optional, because praise not only roots us in our community's history with God, it helps us remember and envision the world that is to come.

For more information about the prevention and response to domestic violence, see especially the Faith Trust Institute (especially good for clergy and congregations). To report or seek help with suspected domestic violence, the National Domestic Violence Hotline, 800-799-SAFE, can connect you to local resoirces. The Rape, Abuse, Incest National Network (RAINN - 800-656-HOPE) will automatically transfer you to the rape crisis center nearest you, anywhere in the nation. It can be used as a last resort if people cannot find a domestic violence shelter.