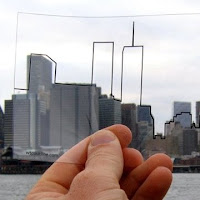 This year we observe the seventh anniversary of the 9/11 attacks. As with all anniversaries, there is an opportunity to reflect upon what this means for us as individuals and in our communities.

In New York City, a number of things are different this year. Construction has begun in earnest on the World Trade Center site. The Pit is growing unrecognizable as such, and this is the last year that public memorial events will take place on the spot where the towers stood. Mayor Bloomburg is seeking to take over control of development, seeking completion of construction by the tenth anniversary of the attack (Bloomberg Urges New York City Take Control of Trade Center Site).

A number of 9/11-related projects are "sunsetting," a genteel term for "no more funding." Some people see this as another example of "get over it already," a thought which has never been absent from public discourse. The needs have not sunsetted, only the money. It is also true that many people have moved on and made accommodations with this history, as is natural and healthy and to be expected.

Yet there are still voices to be heard, images from which the smoke has not yet cleared.

There are archetypal images which have developed over time - stories of heroes, and narratives about the struggle between good and evil. There are images, some clear, some clouded, some forgotten, of the people affected by these events - not only those killed and their loved ones, but of the survivors, the responders, the bystanders. Everyone "of a certain age" has their 9/11 story.

And there are the global waves which spread out when the towers fell, reaching Afghanistan, Iraq, Bali, Madrid, London, Pakistan, and whose effects are still being felt but only partially known. (Let's not forget Guantanamo Bay, Uzbekistan, Egypt, Poland, Georgia, Iran. And while Vice President Cheney was "doing no harm" at the Republican Convention, I suspect we will one day learn he continues to work on the dark side, this time in Azerbaijan.)

Given the way 9/11 has been used and abused as a political device, it is prudent that Senators Obama and McCain have decided to avoid overt campaigning this September 11th. It is appropriate to take a moment to let our decision making be affected by the act of remembering. 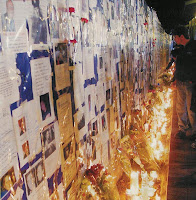 I would like to suggest that the memory start, not with the grand narratives, or an analysis of how 9/11 fits into geopolitics. But that the appropriate starting point for memory is the truth. We need to understand and tell the story of what actually happened, and a crucial part of the truth is the real people involved. We need to see their faces. Our politics and our policies work better when they are rooted in humanity. We knew this, almost instinctively, at the beginning, when "Missing" flyers became sites of civic grief, prayer, and honor. While prayers for rescue morphed into memorials, it was to their faces we looked.

Some good places to look again are:
Voices of September 11th - Living Memorial
New York Times - Portraits of Grief
State Dept - Global Victims and Heroes
StoryCorps
Tribute Center - Person to Person History
Please visit one of these sites and remember some of the people caught up in the midst of this event which has taken on so much significance.

Working as a chaplain in the WTC recovery brought home again and again the goodness of people, seen over and over in stories of their lives and the living testimony of peoples' response to destruction. Ordinary stories of goodness, repeated again and again, are quite extraordinary.

It took very little to destroy those buildings and murder those within them. The Christian symbol of the cross is meant to recall not only the torturous death and the cruelty of those who impose it. The cross also recalls the human life of the one nailed to it. And it points to the promise that while good may not be as dramatic as evil, goodness is stronger, more prevalent and persistent, and constantly being renewed.

May God hallow our remembrance, and lead us into the true recovery work, which abandons destruction and runs headlong to healing.