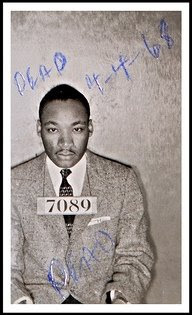 We would like to claim Martin Luther King, Jr. as our own, and believe we stand with him. May it be so.

But King was controversial, opposed, and, at the end of his life, abandoned. As he became more radical, he sought to confront oppressive power in fundamental and far-reaching ways, challenging warmakers and poverty profiteers. His support, his approval, his reputation suffered.

Perhaps it is right that our nation, which justly wishes to celebrate Dr. King and claim him as its own, observes his birthday as a national holiday. But in the church, it is more appropriate to commemorate martyrs on the date of their death.

While we think of martyrs as those who have been killed for their faith, the word means "witness." A martyr is one who gives witness. Martin King gave witness to several things I would like to remember today.

King's oratory was, of course, shaped by his church tradition. But his preaching was in the service of his mission, called by God to proclaim good news to the poor and liberty to the oppressed, to change the hearts of people and the circumstances in which we live. King did not come to justice simply because it is right, but because it is the will of a just and loving God, who had spoken to him, and who he strove to know and follow.

Martin Luther King, Jr.'s vision, his strength, his redemption came to him from a Source that outweighed other concerns. We do not follow in his footsteps unless we also touch that sacred spirit of holy good which animated and supported not only Dr. King, but countless others seeking to live faithfully to the call to justice.

Ghandi's influence upon King (through King's teacher Howard Thurman) has been much noted in King's practice of creative, non-violent resistance. But Ghandi was also a premier community organizer and coalition-builder. King used his experience as a church leader coupled with his study of Ghandi and the assistance of American-developed organizers to work together and achieve change.

Working with others has an important benefit beyond simply building power. In community, you have the chance to "practice what you preach," and begin to realize the kind of society you envision.

Courage in the face of opposition

We do not always recall the personal cost of engaging in a struggle for justice. In the Montgomery bus boycott of 1955-56, as King emerged as a leader, the pressure became intense as he was jailed, threatened, accused of financial impropieties, and opposition strove to split the boycott coalition.

King reached bottom on Jan. 27 when a particularly threatening late-night telephone call brought him to "the saturation point." He went to his kitchen and sat before an untouched cup of coffee, exhausted, his courage "all but gone." As he considered ways to "move out of the picture without appearing a coward," he began to pray aloud. "At that moment I experienced the presence of the Divine as I had never experienced Him before." ["The Unexpected Emergence of Martin Luther King, Jr."]

This was not a one time conversion. Setbacks and fears persisted until the end of his life. One of my pivotal images of Dr. King comes from his last days. Leading a march in support of striking sanitation workers in Memphis, an ugly scene is developing. The March would end in violence, when students at the end of the procession used the signs they carried to break windows of businesses and looting ensued. At one point, a car or truck backfired, and King visibly flinched, expecting it to be a gunshot. I believe the following picture was taken shortly before that moment... 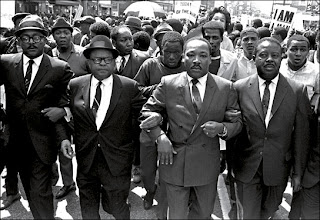 Dr. King in Memphis, March 28, 1968 (JACK THORNELL / AP)
Take note how the leaders are holding onto one another. Their linked arms knit them together in a web of accountability, support, and shared mission. They will stand or fall together.

We do well to remember, and take courage from, the human King. The very real fear of death, of injury, of failure, of humiliation, of ostracism did not magically disappear because he was doing God's will as he understood it. But his fear did not have the last word. Echoing louder in King's ear was God's word of love and hope, and God's promise of a beloved community where peace and justice reign.

Almighty God, in every age you have blessed us with witnesses to your vision for this world. In Martin King we see to this day your hope for peace and justice, and your word that, walking with you, the promised land awaits. Grant that we may step past our fears and into the work to which you are calling us, to proclaim in word and deed your liberating power. Amen.